Size750mL Proof94 (47% ABV)
Aged for 15 months in wine-seasoned French Limousine casks, this gin earned the Gold Medal at the San Francisco World Spirits Competition in 2012.
Notify me when this product is back in stock. 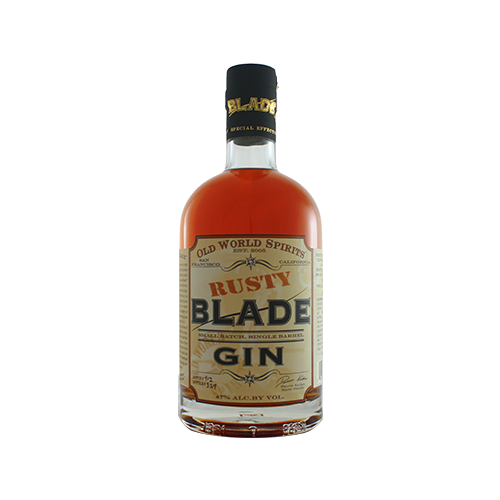 In the 1960s — on the banks of the Adriatic Sea in the Republic of Croatia — Davorin Kuchan began distilling pear and peach eau de vie using fruit he hand-picked from his own backyard. At the time, Kuchan was just a young boy and his father and grandfather, who were both distillers themselves, taught him the importance of harvesting ripe, flavorful fruit and using wild yeasts in order to distill amazing craft spirits. After moving to the United States in 1985, Kuchan began formally studying distillation at Michigan State University, and, in 2007, opened the doors to Old World Spirits in Belmont, California.

Rusty Blade Gin — Kuchan's magnum opus — is one of the first barrel-aged gins produced in the United States. After harvesting flavorful zinfandel grapes from the Santa Cruz Mountains, Kuchan ferments the grapes and double-distills the resulting wine through a 110-gallon hand-hammered Christian Carl copper still in order to create a zinfandel brandy. The brandy is mixed together with a distillate produced from wheat, and the resulting California-style gin is infused with a secret recipe of 11 botanicals, including cilantro, coriander, cardamom, cinnamon, ginger, black pepper, orange, lemon, tangerine and steamed juniper (the juniper berries are steamed outside the still, in order to create a softer flavor profile).

As a result, Rusty Blade Gin has unique notes of caramelized orange, maple syrup and apple pie, which nicely balance out the spicy notes of clove, ginger and allspice. After its slumber in the casks, Rusty Blade Gin is bottled by hand at cask strength (evaporation during maturation naturally reduces it to 94 proof).

Targeted toward bourbon and scotch drinkers, this gin earned the Gold Medal at the San Francisco World Spirits Competition in 2012 and a score of 93 points from the Beverage Tasting Institute. Try a bottle today!

Aroma is spicy and earthy, with hints of citrus and sweetness. Fruity, medium-to-full body, with notes of citrus fruit, apple pie and maple syrup that balance out the spicy notes of nutmeg, clove, and peppercorn. Finish is sweet, with hints of licorice.