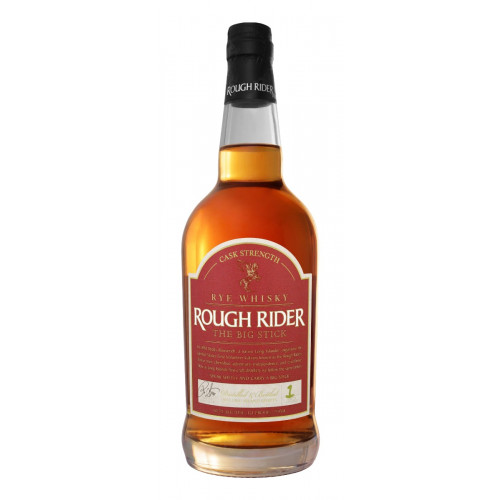 In 1898, Teddy Roosevelt — a Long Island native — organized the First United States Volunteer Cavalry, commonly known as the "Rough Riders," in preparation for the Spanish-American War. The regiment comprised 1,250 volunteers from across the country, including cowboys, Native Americans and other pioneers of the West.

After seeing action in Cuba, the Rough Riders earned a decisive victory at the Battle of San Juan Hill before returning to Long Island. Upon their return, the soldiers celebrated their victory and presented Colonel Roosevelt with a small bronze statue of a cowboy riding a bucking horse. "There could have been no more appropriate gift from such a regiment," wrote Roosevelt later. "Most of them looked upon the bronze with the critical eyes of professionals. I doubt if there was any regiment in the world which contained so large a number of men able to ride the wildest and most dangerous horses."

Rough Rider “The Big Stick” Cask Strength Rye Whiskey has an aroma of toasted rye bread, marmalade and cinnamon sugar, which leads to notes of malt chocolate and chile peppers on the palate. The finish is a touch warm and very smooth.

"It's part of the pioneer spirit to try to do something by putting your own signature on it," says Richard Stabile, Long Island Spirits’ founder and master distiller.

Become a Rough Rider and pick up a bottle of this amazing rye today!

Bottled at Cask Strength, this remarkable Rye reveals its true raw spirit with hints of spice coupled with a touch of malty sweetness, followed by a long warm smooth finish.