Size750mL Proof94 (47% ABV)
River Basin Rye is a distinctive blend of 95% rye mash and 5% barley malt, aged for over two years in new American white oak barrels to produce a rich whiskey that embodies the fiery spirit of New Orleans’s French Quarter.
Notify me when this product is back in stock. 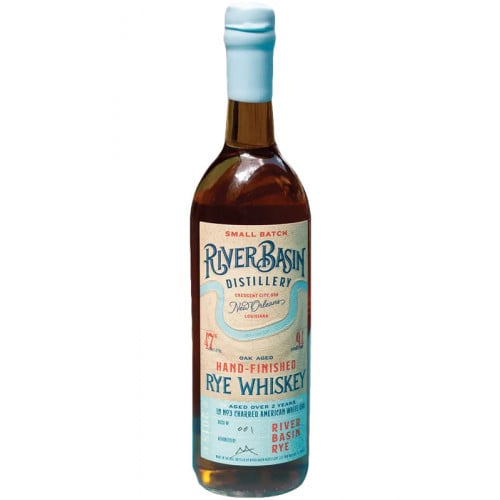 River Basin Distillery is a New Orleans company producing American rye that brings the history of American whiskey full circle. In the 19th century, New Orleans was the whiskey drinking capital of the nation. Distillers from Tennessee to Pennsylvania shipped their whiskey in oak barrels down the Mississippi River. In the 1820’s, bourbon was in such high demand in The Big Easy that every available barrel from fish to nail storage was repurposed for its transportation, with their inside charred to prevent contamination. The journey took several months, and by the time the shipments arrived in New Orleans, the clear spirit put into the barrels turned into delicious amber liquor, taking on the flavors and color of the wood. Thus, New Orleans serendipitously played a key role in developing the process of aging American whiskey in charred oak barrels that give the bourbon its peculiar crimson-hued tint.

River Basin Distillery does not only honor the American heritage, but is also committed to protecting it. Partnering with the non-profit Coalition to Restore Costal Louisiana, the company pledged to donate a portion of all proceeds to preserving the Louisiana wetlands also known as Bayou.

River Basin Rye is a distinctive blend of 95% rye mash and 5% barley malt, aged for over two years in new American white oak barrels to produce a rich whiskey that embodies the fiery spirit of New Orleans’s French Quarter. The first locally made rye whiskey since Prohibition is sourced from up the river, just as it was done 200 years ago. Each bottle is hand finished with a wax seal and individually signed by the bottler. The mellow, yet slightly spicy flavor of the River Basin Rye is strong enough to hold up in any cocktail, yet mild enough for even the staunchest critics of rye whiskey.

The nose is floral, with hints of citrus peel, and mild pepper followed by wafts of butterscotch. The palate is delicately sweet, with soft vanilla notes, and white pepper on the front end with hints of honeysuckle. The finish is crisp and smooth, with a pleasant mix of spice and caramel.