Learn more
Size750mL Proof86 (43% ABV) *Please note that the ABV of this bottle may vary
Alley 6 Rye received a Gold medal Best of Class, Best of Division Distilled Spirits and Cocktail Competition 2018, and a Gold medal at the Craft Distillers Spirits Competition in 2017.
Notify me when this product is back in stock. 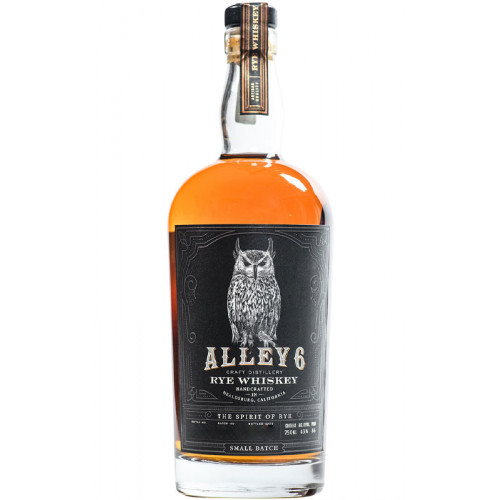 This young, vibrant spirit has a complex flavor and a smoothness in character. Expect flavors of honey and oak and imparts hints of vanilla, rye spice, and a nice subtle caramel note on the palate. Alley 6 Rye received a Gold medal Best of Class, Best of Division Distilled Spirits and Cocktail Competition 2018, and a Gold medal at the Craft Distillers Spirits Competition in 2017.

The Alley 6 facility produces a range of premium spirits, handcrafted in small batches using traditional distilling methods. Boasting two 132-gallon Alembic Copper pot stills, every step of production is carried out on site. Everything from milling the grain, to mashing, fermenting, distilling, barreling, and bottling takes place in Healdsburg.

Complex flavors and smoothness in character. Favors of honey and oak and imparts hints of vanilla, rye spice, and a nice subtle caramel note on the palate. The finish is smooth.