Size750mL Proof92.2 (46.1% ABV)
This gin is lovingly crafted in Kansas City, Missouri with neutral wheat spirit and several botanicals from all over the world. Master Distiller Tom Nichol of Tanqueray fame designed it in the style of traditional London dry gins with a focus on juniper berries. 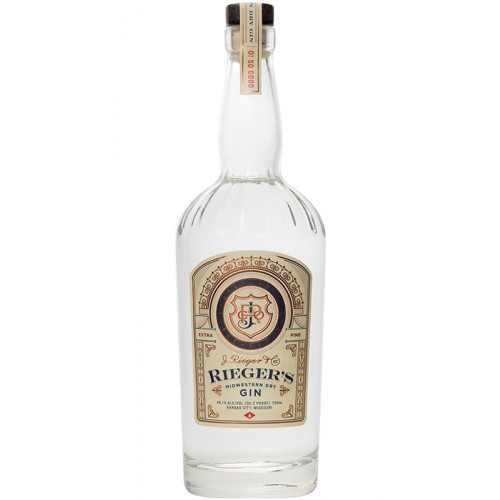 Soon after, Head Distiller Nathan Perry joined the team, studying under the mentorship of Pickerell. Their 750-gallon copper Vendome still came online in 2015 and their lineup started expanding with a wheat vodka, gin, and amaro. Today, they distill 1,200 barrels of rye and bourbon each year and the first 5-year-old whiskeys came of age in 2021. J. Rieger & Co. is the first legal Kansas City distillery since Prohibition.

Rieger's Midwestern Dry Gin takes its cues from the London dry style of gin with a focus on juniper berries. Aromatic and spicy, the gin is crafted with neutral wheat spirit and several botanicals from all over the globe that include juniper, angelica root, licorice root, and orange peel. It was designed with the help of Master Distiller Tom Nichol of Tanqueray fame. The bold and flavor-packed gin is bottled at 92.2 proof.

Get your bottle of this gin today!

The nose is aromatic and earthy with juniper, coriander, and a touch of mint. The palate is bright and gently sweet with citrus zest and spice notes that lead to a crisp and clean finish with hints of licorice and ginger.