Size750mL Proof90 (45% ABV)
Certified organic by the Midwest Organic Services Association, only 800 bottles of this rye have been produced.
Notify me when this product is back in stock. 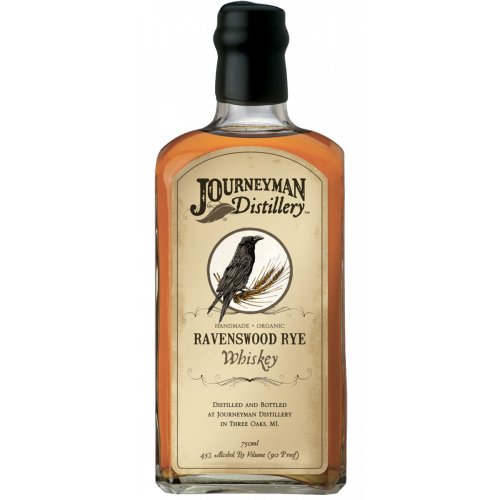 Welter, who was formerly a banker in Indiana, began his Journey when his family business was sold in 2006. He moved to Scotland, where he began to learn the art of craft distillation from Greg Ramsay (master distiller at Nant Distillery) and Bill Lark (master distiller at Lark Distillery). After returning to the United States, Welter apprenticed with Robert Koval of Koval Distillery before opening the doors of his own distillery in Three Oaks.

Journeyman Ravenswood Rye is made by distilling a mash of 60% rye and 40% wheat in a 1000-liter, copper pot still imported from Germany. Welter sources the wheat from a local farmer in Michigan and the rye from a farmer in Illinois. The grains are produced without the use of synthetic fertilizers, artificial pesticides, herbicides, antibiotics, growth hormones, feed additives, or genetically modified organisms and enable Journeyman Distillery to be certified organic by the Midwest Organic Services Association.

Following distillation, Welter ages the rye in newly charred, 15-gallon, American oak casks. The small casks, which result in more contact between the rye and the oak than traditional casks, allow for faster maturation, while at the same time, adding notes of butterscotch and vanilla to the rye. Following maturation, Welter fills and labels each bottle by hand.

The original batch of Journeyman Ravenswood Rye was made in the Chicago neighborhood of Ravenswood. While production was eventually moved to the Featherbone building, the name lives on today. Only 800 bottles of Ravenswood Rye have ever been produced. Try some today!

Hints of butterscotch on the nose with notes of caramel and milk chocolate.