Size750mL Proof90 Proof (45% ABV)
Made from a mash of 90% rye and 10% corn, this whiskey won the Silver Medal at the American Distilling Institute Competition.
Notify me when this product is back in stock. 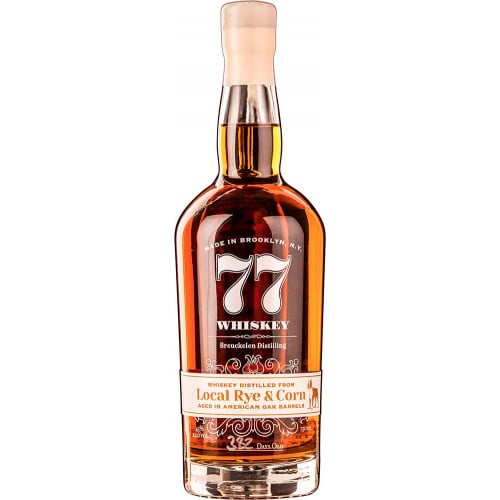 Breuckelen 77 Local Rye & Corn Whiskey is crafted by milling a mash of 90% rye and 10% corn. The grains, which are sourced from local farmers, are milled inside a mixer traditionally reserved for concrete. After milling and mashing the grains, Estabrooke ferments the mash at the distillery without using any genetically modified yeast. As a result, fermentation is a much more costly, labor-intensive process for Estabrooke. Following fermentation, the wash is distilled inside a 400-liter Ulrich Kothe hybrid copper-pot/column still.

Then, Breuckelen 77 Whiskey is aged in charred, new American oak barrels for a minimum of seven months. "I tried a sip of the first batch before bottling," Brad says. "The whiskey had a buttery smoothness with noticeably spicy flavors; cinnamon and nutmeg came immediately to mind." After aging the whiskey, Brad fills and corks each bottle before sealing it with hot, melted wax.

He credits independent food, wine, and beer distributors for making people feel comfortable with trying new brands. "It's a matter of time before they come around with spirits, too," he says. "Consumers have come to realize that small, independent producers can do really special things."

Slightly sweets with notes of vanilla and caramel. Exceptionally smooth, with a well balanced, medium finish.