Size750mL Proof80 (40% ABV)
This modern gin marks Rainier's first foray into spirits since Prohibition. It's crafted and distilled in Seattle in small batches, taking its inspiration from Mount Rainier's forests and pristine waters. The juniper takes the back seat to a herbal profile with huckleberry and spruce.
Notify me when this product is back in stock. 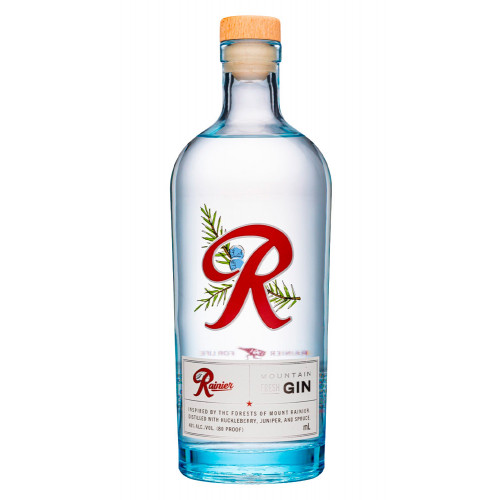 Founded in 1884 in Seattle, Washington, Rainier Brewing Company had been brewing beer at the same brewery since 1878 when Andrew Hemrich, a German immigrant, opened the Seattle Brewing & Malting Company. The brewery became a regional powerhouse with the brewing operations eventually moving from Seattle and the brand slowly losing traction. In the late 1990s, the brewery changed hands a few times before being closed and sold in 1999 by the Pabst Brewing Company which operates and owns the brand to this day.

In 2016 Rainier introduced its first new beer in 2 decades. Rainier Mountain Fresh Gin marks the first time since Prohibition that the Rainier brand has diversified into anything other than beer. It's the third such project undertaken by Pabst, the first two being Pabst Blue Ribbon Whiskey and Olympia Artesian Vodka ― another beer brand from the Pacific Northwest that recently went into distilling.

Crafted in Seattle in small batches, the gin takes its inspiration from the forests of Mount Rainier. It's distilled with Pacific Northwest botanicals that include huckleberry, juniper, and spruce. More herbal than juniper-forward, the unique Rainier Mountain Fresh Gin is bottled at 80 proof.

Get your bottle of this gin today!

The modern gin has a clean profile with herbal aromas, pine, juniper, and floral undertones. The palate has citrus, huckleberry, mint, and a touch of juniper, leading to a smooth, bright, and refreshing finish.