Size750mL Proof90 (45% ABV)
Made with five unique botanicals, this gin pays homage to traditional Old Tom gins crafted centuries ago.
Notify me when this product is back in stock. 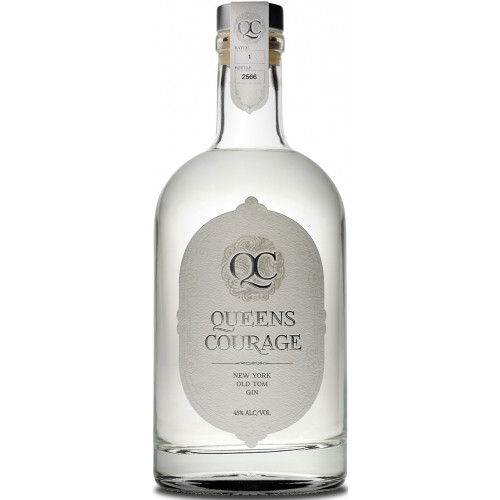 Old Tom Gins were first became popular in 18th century London. The gins were made to be slightly sweeter than London Dry Gins and slightly drier than Dutch Jenevers, and were often considered to be the "missing link" in the gin industry. The name of the gin is derived from black cats (the "Old Toms") that were often mounted on the wall of British pubs centuries ago. Pedestrians walking past the pub could deposit a coin under the cats paw without ever entering the building. The bartender would collect the coin and in exchange, pour a shot of gin to the customer.

Queens Courage New York Old Tom Gin "pays homage to Old Tom Gins crafted in the 18th century," says Chris Murillo, the distillery's founder. In order to create the signature sweet flavor profile, Murillo uses "100% New York honey." In addition, Murillo uses a secret blend of four other botanicals, including juniper and grapefruit. "Unlike most gins, we distill our botanicals in separate runs, called fractions," says Murillo. This allows us to treat each fraction differently to get the best individual flavor, before marrying all the components together to get the best unified flavor profile we can. This is a lot of extra work, but we think it is worth it."

As a result, Queens Courage has a sublime, slightly citrusy aroma. Hints of juniper and coriander complement bolder notes of grapefruits, lemons and citrus. The finish is sweet yet soft, with an oily, silky texture.