Learn more
Size750mL Proof115.4 (57.7% ABV) *Please note that the ABV of this bottle may vary
Juniper is the lead instrument in this botanical orchestra, created as a desire by Sipsmith to create the “ultimate gin for juniper lovers.” 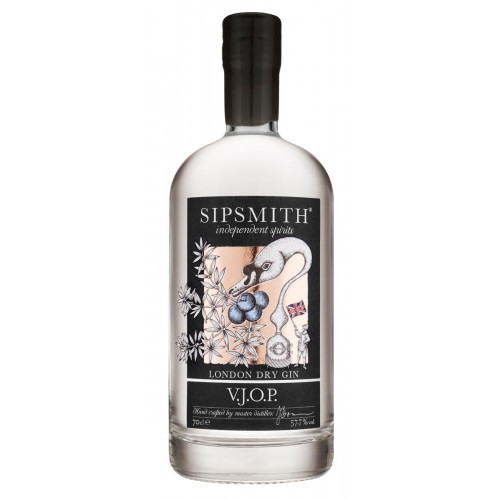 Once the botanicals arrive at the distillery, they are distilled through a copper-pot still named Prudence (Prudence is able to produce approximately 280 bottles of gin each day). "Prudence is the first copper still installed in London in nearly 200 years. We designed her with Germany's oldest distillery producers, Christian Carl — a small, family business that has been crafting stills since 1869. She is the only one like this in the world." The still is designed with a bespoke pot, column still and carter head, which makes it incredibly versatile. After the botanicals have been distilled through Prudence, the gin is brought to proof with water sourced from the Lydwell Spring before being bottled by hand.

Sipsmith London Dry Gin V.J.O.P is a desire by Sipsmith to create the “ultimate gin for juniper lovers.” This powerful overproof spirit is an amplified take on their London Dry, using triple the amount of juniper berries, and crafted by macerating the juniper berries in warm spirit overnight to burst the skins and release the essential oils. Juniper is the lead instrument in this botanical orchestra, enhanced by the increase in proof which is necessary when increasing the flavor profile in a gin. At 57.7% ABV, this juniper-forward gin uses triple the amount of juniper berries to their London Dry Gin.

Junipery pine and cedarwood dominate with hints of zesty orange on the nose. The palate has big juniper notes on the fore, with rich spice and notes of dark chocolate. The finish is long and dry with a lovely balance, letting the juniper shine through.