Size750mL Proof80 Proof (40% ABV)
Aged for 3 to 5 years and bottled at cask strength, this rum earned the Gold Medal at the International Cane Spirits Festival.
Notify me when this product is back in stock. 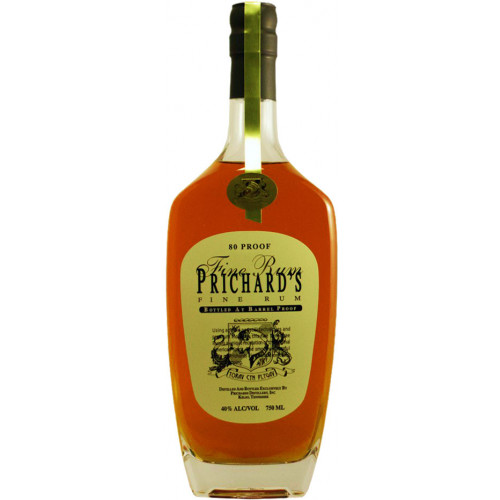 Benjamin Prichard began distilling Prichard's Tennessee Whiskey in Davidson County, Tennessee, nearly a half century before the Civil War began. In the antebellum South, his whiskey — made using white corn and pure Tennessee spring water — was incredibly popular. When he passed away in 1822, Prichard passed his "still, tubs and utensils thereto"on to his son, Enoch. Enoch eventually gave up the family business, and focused his energies elsewhere. In 1997 — five generations later — Phil Prichard took up the mantle once again when he opened the doors to Prichard's Distillery in Kelso, Tennessee. The first legal distillery in Tennessee in nearly fifty years, Prichard's Distillery is located just a few miles south of where Phil's great-great-great grandfather distilled whiskey nearly two centuries ago.

Prichard's Fine Rum is made from premium table grade molasses, which Prichard sources from Louisiana. "We start with our fermenter," says Prichard. "We put in our water, our molasses and our yeast and our yeast nutrients and in about 10 days, we have a pretty good molasses beer." After the molasses beer, or wash, is prepared, it is distilled first through Prichard's copper-pot beer still, before being distilled a second time through his copper-pot spirit still. "We do a second distillation," says Prichard, "which really just polishes and refines the rum."

After the second distillation, the rum is brought to proof and poured into 15-gallon, newly charred white oak barrels. "The char that you see in there is what we refer to as an alligator char," says Prichard, pointing to the barrels in his small rickhouse. "It looks like an alligator back. That's what we ask for — a 3 millimeter alligator char. These are made from us by a small cooperage in Hot Springs, Arkansas. Going over there to visit their cooperage is like taking a step back in time."

After the rum has aged for 3 to 5 years, Prichard and his team of distillers fill and label each bottle by hand at cask strength. Prichard's Fine Rum has a golden hue, with an aroma of chocolate, almonds and vanilla. The initial notes of vanilla and bananas give way to hints of coconut, sweet molasses and a touch of smoke. The long, complex finish has hints of cinnamon and cardamom that are balanced by sweet notes of malt and molasses.

Prichard's Fine Rum earned the Gold Medal at the International Cane Spirits Festival in 2006 and 2007. Pick up a bottle today!

Aroma of vanilla, chocolate and almonds. Notes of vanilla and bananas give way to hints of coconut, sweet molasses and a touch of smoke. Long, complex finish that is well-balanced.