Size473mL Proof0% ABV
Crafted with high-quality raw demerara sugar, the True Rich Simple Syrup is closer to its late-19th-century counterparts. It adds another layer of texture and mouthfeel to cocktails and punches.
Notify me when this product is back in stock. 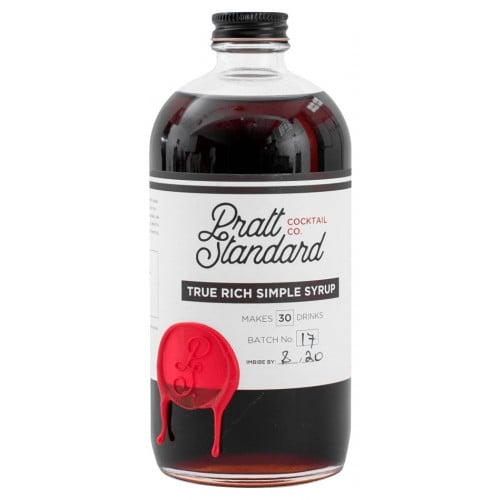 Pratt comes from a family that has worked in the food industry since she can remember. It wasn't until she bought a high-quality craft gin that she realized a cheap run-of-the-mill tonic simply wouldn't cut it. After much research and experimentation she ended up with the True Tonic Syrup, the first in the growing lineup of syrups that now include the Ginger Syrup, Grenadine Syrup, Kola Syrup, and Rich Simple Syrup. Now there's even the seasonal Spring Syrups series with Blackberry Mint, Rosemary Grapefruit, and Bitter Lemon variations. The name of the game is super-high quality and versatility, eschewing artificial additives, and creating syrups that complement ― rather than overpower ― the spirits they are mixed with.

A lot of research goes into the creation of each hand-crafted syrup. The True Rich Simple Syrup is crafted with the finest-quality raw demerara sugar, which is closer to what was used in the late 19th-century cocktail boom. Heavy on molasses, it brings another layer of texture and mouthfeel to cocktails with only half as much needed in comparison to generic simple syrup. A single 16oz bottle makes 32 to 50 drinks.

This syrup is crafted with high-quality raw demerara sugar, making it richer than your regular simple syrup. It adds complexity, texture, and mouthfeel to cocktails and punches.