Learn more
Size473mL Proof0% ABV *Please note that the ABV of this bottle may vary
A whole pound of ginger root goes into a single bottle of this hand-crafted ginger syrup, making it an all-natural and premium offering with intense ginger flavor. Use it to add a ginger kick to your cocktails or just add club soda to make ginger beer or ginger ale.
Notify me when this product is back in stock. 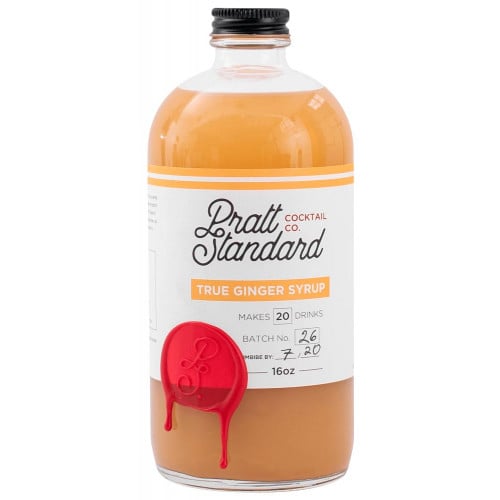 The True Ginger Syrup is Pratt Standard's best-seller. Crafted with whole ginger root, organic evaporated cane juice (instead of the commonly used extract), water, and citric acid, a whole pound of ginger goes into a single bottle of this syrup. It's all-natural and you get to choose your own intensity of the flavor ― mixed with club soda you can go from ginger beer to ginger ale. As with all their offerings, there's no corn syrup and artificial ingredients. Use this hand-crafted syrup to add a spicy kick to various cocktails such as the Moscow mule or Penicillin.

It's all-natural and packed with real ginger flavor since a whole pound of ginger root goes into this syrup. Sweet and spicy, it adds a ginger kick to your mixed drinks and makes a perfect ginger beer or ginger ale.