Learn more
Size750mL Proof90 (45% ABV) *Please note that the ABV of this bottle may vary
Aged for over two years, this rye whiskey is infused with an assortment of whole herbs and botanicals, including saffron and orange peel.
Notify me when this product is back in stock. 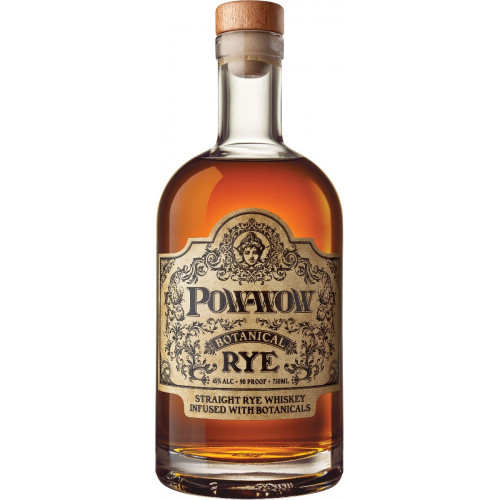 Pow-Wow Botanical Rye Whisky is a straight rye whiskey that was crafted in homage to rye's storied history in the United States. Once the rye has matured for a minimum of two years, it is carefully infused with a number of whole botanicals, including saffron and orange peel (no extracts or artificial colors are added). Then, the whiskey is carefully filtered before each batch is bottled by hand.

Pow-Wow Rye is incredibly fragrant, with an aroma of cedar, vanilla and citrus. It has notes of raisins, dark chocolate and stone fruits, along with hints of saffron and citrus zest. The finish, which is long and intense, has touches of cinnamon and spicy rye.

Incredibly fragrant, with an aroma of cedar, vanilla and citrus. Notes of raisins, dark chocolate and stone fruits, along with hints of saffron and citrus zest. Finish, which is long and intense, has touches of cinnamon and spicy rye.