This product is available in: CA, FL, IL, NY Unfortunately, we can't ship to PO Boxes and APO addresses.

Size750mL Proof52 (26% ABV)
Born in a town steeped in history, where fruit gin traditions predate the town itself, Plymouth’s Sloe Gin is a rendition of a classic 1883 recipe. A Gold Medal winner at the 2011 San Francisco World Spirits Competition, “The making of fruit gins has long been a tradition in the English countryside, and ours keeps true to a recipe dating back to 1883” (Plymouth Gin).
Notify me when this product is back in stock.

This product is available in: CA, FL, IL, NY Unfortunately, we can't ship to PO Boxes and APO addresses. 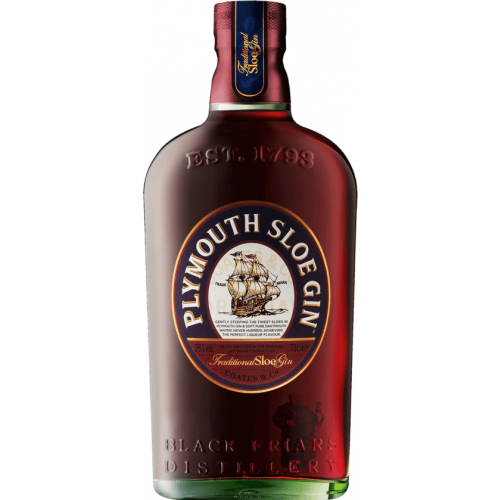 What was once a 15th century monastic building is now home to the Black Friars Distillery, the only remaining distillery in Plymouth, England. The Port of Plymouth was once a “beacon for explorers,” an important hub of commerce for maritime traders. Although “Plymouth Gin” is a distinction reserved only for gins that are distilled in Plymouth England, the Plymouth brand is the only brand produced in the area.

The Plymouth distillery (also known as the Black Friars Distillery) was once a Dominican Order (also known as the Black Friars) monastery built in 1431. Founded by a man named Mr. Coates as a distilling business in 1793, the distillery itself has been producing the Plymouth brand ever since, under Fox & Williamson (which switched names thereafter to Coates & Co). After changing hands several times, England’s oldest working distillery, and its brand, are now produced under the colossal Pernod Ricard, as of 2008.

The distillery’s buildings served many purposes throughout the 15th and 16th centuries. Formerly a Black Friars monastery, in 1536 became the town’s “Marshalsea” (debtor’s prison). It is believed that this location was were the first Non-Conformist meeting took place, also serving as a billet for Hugenot refugees. Later on it was said to have housed the Pilgrim Fathers during their last night in England in 1620, before the boarded the Mayflower.

“It was from the distillery they made the short walk down to the harbour to set sail on the Mayflower on their epic voyage to start a new life in America, where they founded a new Plymouth” (Plymouth Gin). The Mayflower ship is Plymouth’s signature trademark, which is brandished on the labels of all of their bottles. The brand has several expressions in their range, including Plymouth Sloe Gin.

Born in a town steeped in history, fruit gin production has a longstanding history in the West Country, with traditions that are said to predate the town itself. This particularly popular sloe gin is originally crafted by a process that includes the soaking of blackthorn bush and sloe berries in Plymouth's Original Gin, before adding sugar. The sloe berries are what give the gin it’s signature red color. A Gold Medal winner at the 2011 San Francisco World Spirits Competition, Plymouth Gin’s version of this fruit infused spirit is based on “a classic 1883 recipe and is an essential part of numerous classic cocktails, including the Sloe Gin Fizz” (Plymouth Gin).

Pick up a bottle of this historic sloe gin today!

Botanical aromas of juniper berries and coriander seed provide a balance to the gin with its citrus aromas, and a hint of sour and spice. The palate is clean with orange peels, lemon peels, herbs, green cardamom, angelica root, orris root, sloe berries.