Learn more
Size750mL Proof84 (42% ABV) *Please note that the ABV of this bottle may vary
A molasses-based blend of column and pot-still rums, Plantation Barbados 2001 is a golden Caribbean rum vintage release that was first aged for 9 years in ex-bourbon casks and ex-sherry casks in the tropical climate of the Caribbean and finished in ex-cognac casks for an additional 3 years.
Notify me when this product is back in stock. 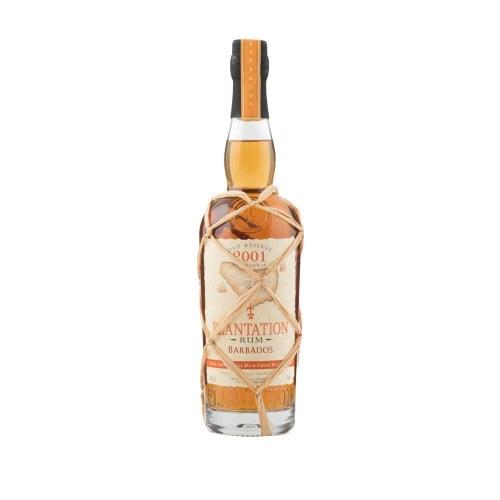 Owned by the renowned French cognac house Maison Ferrand, helmed by Alexandre Gabriel, Plantation Rum is rooted in over four centuries of rum distillation tradition in Barbados, the birthplace of rum. During his decades-long career at Maison Ferrand, Gabriel would dispose of used cognac casks by selling them to distilleries in Scotland and the Caribbean.

"Our love affair with rum began when we sold the prized casks that once held our Cognac to rum producers, and we fell in love with their product," says Alexandre. Centuries ago, Caribbean rum producers would send casks of rum to Europe and the United States, where the rum would mature before it was bottled and sold to the public. "This is a practice that was done more commonly in the past but has almost disappeared now. We thought who better than Ferrand, with our know-how and exceptional casks, to resurrect this ancient technique."

A molasses-based blend of column and pot-still rums, Plantation Barbados 2001 is a vintage release that was first aged for 9 years in ex-bourbon casks and ex-sherry casks in the tropical climate of the Caribbean, accelerating the aging process. Finally, it's finished in ex-cognac casks for an additional 3 years. The first sip brings a delicious combination of fresh mint, chocolate, candied walnuts with orange zest, and shortbread cookies. The finish is insanely long and slightly bittersweet.

The nose is enticing with exotic fruits, including banana, mango, pineapple, and cinnamon. The palate is a delicious dance of fresh mint, chocolate, candied walnuts with orange zest, and shortbread cookies. The finish is insanely long and slightly bittersweet.