Size750mL Proof84 (42% ABV)
Crafted on-site at a distillery in Azpitia in Peru, this award-winning pisco is velvety and warm with a pop of eucalyptus. Perfect for sipping or mixing.
Notify me when this product is back in stock. 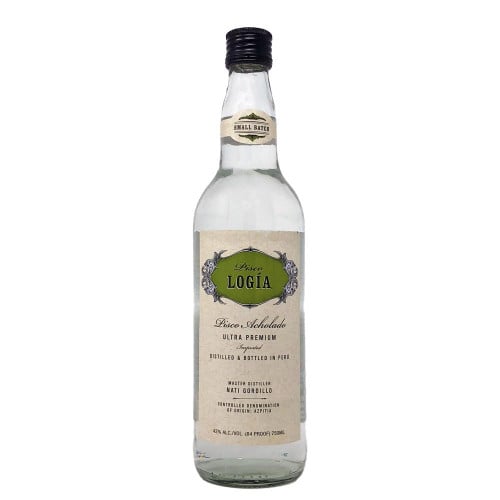 A 100% women-owned and operated company, Pisco Logia was founded in 2008 by Meg McFarland, a former Spanish teacher. In 2003, Meg had her first pisco sour in Lima. She fell in love with the cultural experience of drinking pisco, with Peru and its culture and nature. Pisco is a traditional Peruvian colorless brandy that dates back to the 16th century. Inspired by Peruvian culture, Meg decided to create an exquisite craft pisco to be made available all over the world.

Teaming up with a long-time distiller Nati Gordiollo, PiscoLogia is crafted at a distillery in Azpitia in the lush vine-growing Mala River Valley near Lima, where the Mala River provides fresh water from the Andes, the entire production takes place at the distillery's estate. The estate-grown grapes are crushed by foot and native yeasts are used for fermentation. Single distilled in copper pot stills, PiscoLogia was named the best distilled spirit in the world at the 2011 Concours Mondial de Bruxelles.

PiscoLogia Acholado is a blend of brandies, including estate-grown Quebranta, which is the strongest and most flavorful of pisco grapes, Torontel, and Italia grape. Matured for 6 months, it's velvety and warm with a pop of eucalyptus. Perfect for sipping slowly or for mixing.

Get your pisco today!

Clear. The nose offers chocolate and jasmine with hints of green apple, citrus, and muscat. The palate is velvety and warm with dried fruit, pecan, and dried apricot. The finish is long and balanced.