This product is available in: CA, FL, IL, NJ, NY Unfortunately, we can't ship to PO Boxes and APO addresses.

Size750mL Proof97 (48.5% ABV)
Tiz Rye Time is an annual-release straight rye whiskey and the starting point of the new Vertical Series. The series will follow a group of 950 barrels over the following 9 years as it ages from this 4-year-old to a 12-year-old.

This product is available in: CA, FL, IL, NJ, NY Unfortunately, we can't ship to PO Boxes and APO addresses. 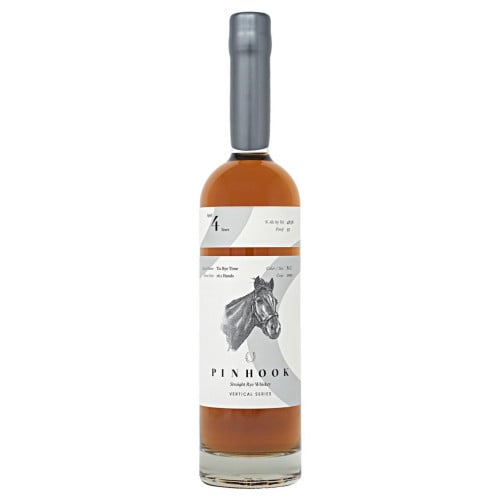 The 2020 rye expression is Pinhook Tiz Rye Time 4YO Vertical Series, a straight rye whiskey that is crafted from a mash bill of 95% rye and 5% malted barley. Bottled at 97 proof, it's the first of a new annual-release series. "It will be exciting to follow the maturation of both rye and bourbon over the course of 9 years and understand how each style of whiskey progresses individually as well as in comparison to the other," says Master Blender Sean Josephs. "The 4 Year old rye at 97 proof is already showing great complexity, depth and structure and I am fascinated to go on this whiskey journey which will culminate with a 12 year old rye in 2028."

The rye whiskey opens with fruity and citrusy notes with tangerine zest in the foreground. There's plenty of cinnamon and toffee as well. The palate has dried apricot, molasses, toasted cedar, and clove notes, culminating in a satisfyingly long finish with lingering notes.