Size750mL Proof108.8 (54.4% ABV)
This premium single whiskey expression is non-chill filtered to preserve all the natural flavors. Bottled at barrel proof, this is a rich and mellow straight rye. 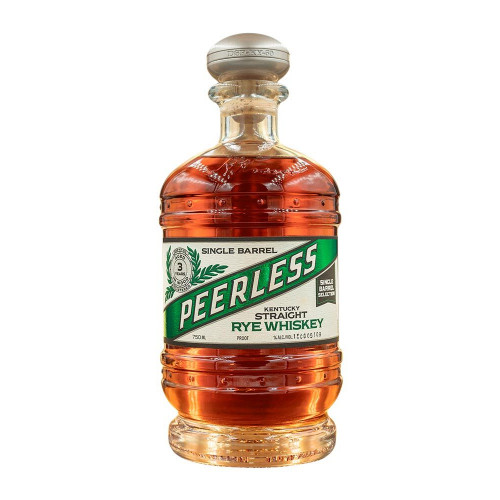 The roots of Kentucky Peerless Distilling date back to the early 1880s when it was operating as Worsham Distilling Company in Henderson, Kentucky. Headed by a bold entrepreneur Henry Kraver who invested in technological upgrades and new machinery as well as opened up additional warehouses, the production of Peerless products flourished, and their whiskey was one of the few available during Prohibition by prescription for medicinal use.

Single barrel whiskey is premium whiskey for which each bottle comes from a single individual aging barrel instead of blending together various barrels. For Peerless Straight Rye Single Barrel, Head Distiller Caleb Kilburn and his team exclusively chose barrels of supreme quality to deliver unique flavors that make this expression stand apart from the standard profiles. Peerless Straight Rye Single Barrel begins with fresh water and a sweet rye mash and it's bottled at barrel proof. Peerless whiskey is never chill filtered to preserve all the craft flavors. Feel free to add a drop of water to open up the rich and mellow flavor profile.