We're showing you items that ship to DC.

This product is available in: CA, DC, IL, NE, NH Unfortunately, we can't ship to PO Boxes and APO addresses.

Size750mL Proof92 (46% ABV)
Berry Bros. & Rudd’s No.3 is a classic London dry gin, containing 6 botanicals that create the perfect balance of juniper, citrus and spice. The creators’ passion for perfection reflects in four titles of World's Best Gin, and No.3 becoming the first gin to win the Global Spirits Championship.

This product is available in: CA, DC, IL, NE, NH Unfortunately, we can't ship to PO Boxes and APO addresses. 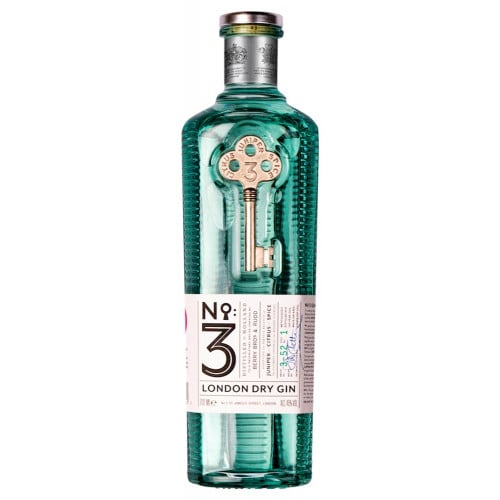 About No.3 London Dry Gin

Berry Bros. & Rudd is Britain's oldest wine and spirits merchant, which was established as a grocery shop in 1698 by a widow, of whom very little is known today apart for her last name Bourne, and the fact that she opened the shop at No.3 St James’s Street, opposite St. James’s Palace. In 1760, the company made its first supply to the British Royal Family. In the first half of the 19th century, the company's focus started shifting, and the company entered the 20th century as a wine and spirits merchant exclusively. Its business flourished, and over a century later, the company now has offices in Asia, a wine school, and a fine dining venue in London's St James's, however its heart still remains at No.3. They also hold two Royal Warrants for H.M. The Queen and H.R.H. The Prince of Wales, which means that they get to advertise themselves as royal suppliers.

In 1923, Francis Berry and Hugh Rudd came up with the idea to create a whisky, and the legendary Cutty Sark scotch was born. Almost a century later, the famous scotch is no longer sold under the Berry Bros. & Rudd name, however the company's brand now comprises a fine selection of spirits, including gins.

When making its No.3 dry London gin, Berry Bros. & Rudd took no chances. The team of spirit specialists that worked on creating this gin for 730 days even included the only person in the world with a PhD in gin — Dr David Clutton. No.3’s production is a carefully crafted process. The 6 botanicals — grapefruit peel, orange peel, coriander, cardamom, juniper berries and angelica root — are weighed out precisely, and then steeped for over 16 hours in ultra-pure grain spirit. After more than 7 hours of distillation, the heart of the distillate is collected by the Master Distiller, and the gin is triple-checked, before being bottled at 46% ABV, so you get nothing short of perfection. This dedicated approach to creating the best gin resulted in No.3 winning four titles of World's Best Gin at the International Spirits Challenge, and becoming the first ever gin to win the Global Spirits Championship.

The nose is bright, crisp and fresh, with an uplifting welcome of juniper. On the palate, the juniper is supported by floral notes and spicy, warm cardamom, and the zesty citrus is complemented by the spiciness of coriander. In the finish, you can expect the earthy dryness of angelica.