Size750mL Proof86 (43% ABV)
This Japanese whisky, which is a marriage of single malts distilled at the Yoichi and Miyagikyo distilleries, is aged in various types of oak casks.

*Nikka has recently changed their labels, and as the original labels are being phased out, there is still a chance that you might receive a bottle different than what is pictured. But rest assured, the liquid remains the same, regardless of the label. 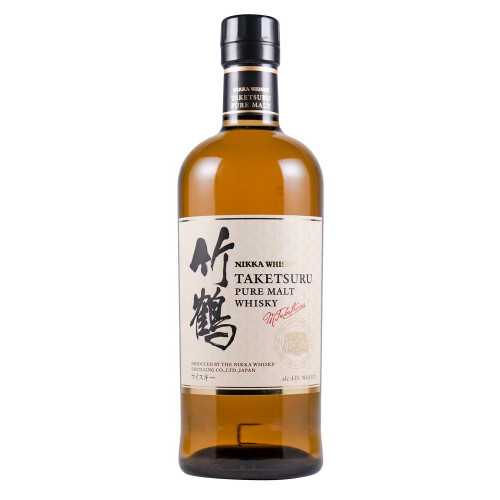 In 1895, Masataka Taketsuru, "the father of Japanese Whisky," was born in the small town of Takehara, Japan. At the time, Masataka's family owned a sake brewery, and in preparing to carry on the family trade, Masataka studied chemistry and biology at Osaka Technical High School. After graduating high school, Masataka showed more interest in whisky than in sake and in 1918, he enrolled at the University of Glasgow in Scotland, becoming the first Japanese ever to study the art of whisky-making. While in Scotland, Masataka took chemistry courses during the day while apprenticing with distilleries at night, learning to distill and blend whisky first-hand at some of Scotland's most prestigious distilleries. In 1920, Masataka returned to Japan, and within the decade, had produced the country's first single malt whisky.

Nikka Taketsuru Japanese Pure Malt Whisky is a marriage of single malt whiskies distilled at the Yoichi and Miyagikyo Distilleries. Once each of the whiskies has been distilled, they are aged for an average of 10 years in various types of oak casks before being vatted together to create Taketsuru Pure Malt Whisky. As a result of this vatting, Taketsuru Pure Malt has a soft, floral aroma, with notes of green fruits, papaya, lemon and brown sugar. Notes of toffee, almonds, roasted nuts, and custard appear on the palate, and are complemented by touches of nutmeg and clove. The finish is full-bodied and lush, with hints of cocoa, peat and oak.

Soft, floral aroma, with notes of green fruits, papaya, lemon and brown sugar. Notes of toffee, almonds, roasted nuts, and custard appear on the palate, and are complemented by touches of nutmeg and clove. The finish is full-bodied and lush, with hints of cocoa, peat and oak.