Size750mL Proof80 (40% ABV)
Kujira Ryukyu Whisky is a rice whisky made by aging traditional Japanese spirit awamori. The spirit was distilled from selected Indica rice fermented with the black Koji mold, and matured in virgin white oak cask for at least three years.
Notify me when this product is back in stock. 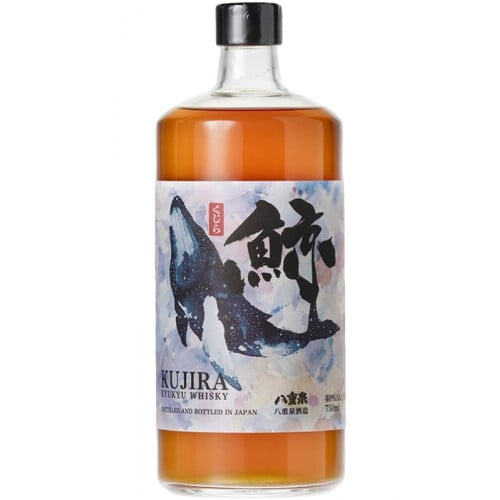 Shin Group started out in 2012 as a distribution company with a focus on unique premium Japanese liquor products. Since then it has partnered up with a number of distilleries in Japan and Scotland and now owns several well-known brands, and has expanded its distribution network to over 40 countries and regions across the globe. Unique Japanese spirits have remained an important part of its portfolio, and Shin Group has been proudly presenting products such as awamori, shochu and Japanese rice whisky to the world.

Shochu’s less known sibling awamori is a traditional Japanese spirit distilled from long grain Indica rice, originating in the ancient Ryukyu Kingdom. Dating back to the 15th century, awamori is Japan's oldest distilled spirit. While shochu can be made from a number of ingredients, such as rice, barley, sweet potatoes or buckwheat, authentic awamori is made using only three: water, Indica rice and black koji (a mold indigenous to Okinawa). The spirit is distilled only once in steel pot stills. Awamori is traditionally aged in clay pots called kame to mellow out, however several Japanese distillers started experimenting by putting it in oak barrels, creating a new type of Japanese rice whisky. Kujira Ryukyu is Shin Group’s line of whiskies produced by traditional awamori and shochu distilleries. One of these distilleries is Yaesen Shuzo, located on the island of Ishigaki, which is part of the Yaeyama Island group in the Ryukyu Islands archipelago. The distillery, founded in 1955, originally produced traditional Ryukyu awamori and pineapple liqueur.

Kujira Ryukyu Whisky was distilled from selected Indica rice that was fermented with the unique black Koji mold. The spirit is matured in virgin white oak cask, and this limited-edition expression is a blend of the 8-year Kujira Ryukyu Whisky and whisky matured for at least three years.

Slightly peated oak aroma on the nose is accompanied by caramel, toffee, and a hint of dark plum. The palate is sweet, with some sour undertones, and flavors of honey and wood. The finish is long and sweet, with notes of vanilla and oak.