Size750mL Proof80 (40% ABV)
A blend of whiskies from the Japanese distilling giant Nikka's both main distilleries, this light, mellow, and smooth spirit is a combination of grain and malt whiskies: Coffey Grain, Miyagikyo Malt, as well as some Coffey Malt and Yoichi Malt. 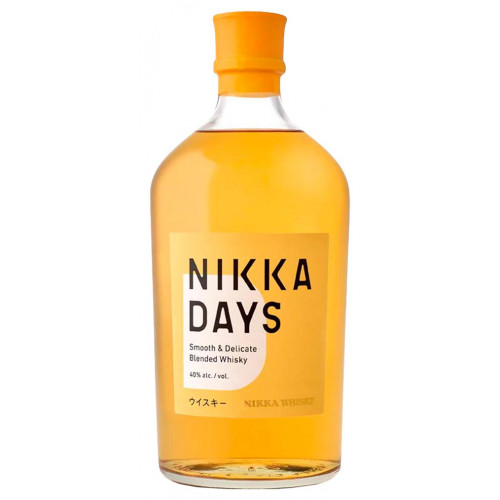 In 1895, Masataka Taketsuru — the father of Japanese Whisky — was born in the small town of Takehara, Japan. At the time, Masataka's family owned a sake brewery, and in preparing to carry on the family trade, Masataka studied chemistry and biology at Osaka Technical High School. After graduating from high school, Masataka showed more interest in whisky than sake, and in 1918, he enrolled at the University of Glasgow in Scotland, becoming the first Japanese ever to study the art of whisky-making. While in Scotland, Masataka took chemistry courses during the day while apprenticing at distilleries at night, learning to distill and blend whisky first-hand at some of Scotland's most prestigious distilleries. In 1920, Masataka returned to Japan, and within the decade, had produced the country's first single malt whisky.

Nikka Days is a celebration of the distillery's unique position somewhere between the east and west cultures, nature and humanity, tradition and innovation, where each day represents a learning opportunity. The smooth and gentle blended whisky is lightly peated and comes from Nikka's both main distilleries. It's a combination of grain and malt spirits: Coffey Grain, Miyagikyo Malt, as well as some Coffey Malt and Yoichi Malt.

The nose opens with fresh, fruity, and floral notes, with citrus, pear, and a hint of oak. It's light on the palate with cereal, malt, roasted nuts, toffee, vanilla, and delicate sweetness. Finishes with dried fruit, malt, vanilla, and just a touch of nuttiness and peat.