Learn more
Size750mL Proof92.2 (46.1% ABV) *Please note that the ABV of this bottle may vary
This whisky, which was aged exactly 70 years in Spanish oak and held the title of “world’s oldest whisky,” was described as “delicate, fresh, vital, fruity whisky” by esteemed writer Charles MacLean.
Notify me when this product is back in stock. 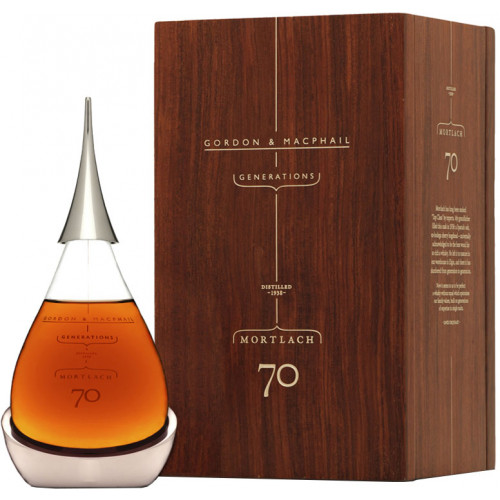 Mortlach Distillery was founded in 1823 by James Findlater, together with his friends Alexander Gordon and James Macintosh. In 1831, however, Findlater sold the distillery to John Robertson for the paltry sum of £270. In 1837, it was sold again to John and James Grant, who dismantled the distilling equipment and shuttered the doors to the distillery. For the next two decades, the building was used first as a brewery, and then, rather curiously, a church. In 1851, however, the distillery began producing whisky once more. Even at the time, it was an impressive distillery, according to the Wine & Spirits Trade Record. The distillery had two still-houses: “In one there are three old-fashioned stills, in the other there are three larger stills, installed in 1897.” The distillery also had “four gigantic malt floors, and the largest mash tun in the district."

In 1964, the distillery was largely rebuilt and today, houses a unique configuration of six stills. The stills — three wash stills and three spirit stills — are each different shapes and sizes (one still is nicknamed “Wee Witchie” because it is shaped like a witch's cap), and aren't paired together. This unusual configuration, together with the partial triple distillation method used at Mortlach Distillery, produces a whisky that is full-bodied and meaty.

“This is a very special day for us, one we’ve literally been anticipating for generations. Our family has been in the whisky business for a long time, with each generation building and handing on a lifetime’s expertise to the next,” say David and Michael Urquhart.

Mortlach 70 has a delicate aroma of rosewood, black cherries, dates and licorice. The palate is fresh, with starburst notes marrying elegantly with sherried oak and peat smoke, and leads to a supple finish accented by big notes of peaches, saddle leather and candlewax.

The world’s oldest whisky when it was originally released, pick up a rare treasure today!

Delicate aroma of rosewood, black cherries, dates and licorice. The palate is fresh, with starburst notes marrying elegantly with sherried oak and peat smoke, and leads to a supple finish accented by big notes of peaches, saddle leather and candlewax.