Size750mL Proof70 (35% ABV)
Made using two-row barley and distilled in traditional fashion, this shochu is available exclusively through Caskers.
Notify me when this product is back in stock. 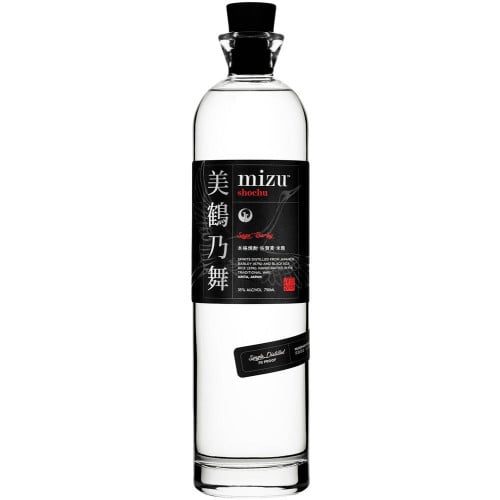 Since the time of the Ashikaga shogunate in the 16th century, tiny villages situated along the mountains of Kyushu in southwest Japan have been producing shochu. Shochu is a unique Japanese spirit, typically distilled from barley or potatoes (as compared to sake, which is a type of rice wine), and has a signature earthy flavor. While shochu has been distilled in Japan for over four hundred years, it is only in the past decade that shochu has experienced a resurgence — in 2003, Japanese production of shochu surpassed production of sake for the first time.

New to market, Mizu Shochu is distilled from two-row barley, which is sown in the early spring and harvested in the summer. After local farmers in Saga, Japan harvest the barley, it is polished, washed, and steamed before tojis (master distillers) Wada-san and Okoba-san begin fermenting the grains. In order to begin fermentation, the tojis add steamed rice that is coated with black koji microbes to the mash, along with a touch of yeast and pure water sourced from Black Hair Mountain. The koji microbes, which release a gentle citric acid during fermentation, impart a distinctive aroma and flavor to the shochu, and bring out the subtle sweetness of the barley.

Following fermentation, Mizu Shochu is distilled in a single pass (traditional shochu is only distilled once) and, after being left to rest for at least six months, brought to 70 proof using water from Black Hair Mountain. Much like American law with respect to bourbon, Japanese law prohibits adding any sugars, sweeteners or flavors that affect the taste of shochu once it has been distilled. The higher alcohol content of Mizu reflects its status as a "genshu-style" shochu — shochu that allows the tojis to show off their skill and craftsmanship using the finest ingredients available to them, resulting in rare, artisanal shochu a cut above typical shochu.

As a result, Mizu Shochu has a robust aroma of cantaloupe and freshly cut grass that is complemented by hints of bananas, raisins and brown sugar. The flavor is smooth and slightly creamy, with mellow notes of fresh, slightly sweet grains that lead to touches of caramel and vanilla on the finish.

Mizu Shochu is also known by its full name, Mizunomai which means "dance of the beautiful crane." The shorter form of Mizu is a play on the Japanese word for water, which is evoked by the smoothness and purity of Mizu Shochu.

Mizu Shochu is available exclusively through Caskers for a limited period of time. Pick up a bottle of artisanal shochu today!

Robust aroma of cantaloupe and freshly cut grass that is complemented by hints of bananas, raisins and brown sugar. Smooth and slightly creamy, with mellow notes of fresh, slightly sweet grains that lead to touches of caramel and vanilla on the finish.