Learn more
Size750mL Proof65 (32.5% ABV) *Please note that the ABV of this bottle may vary
Made with cinnamon, rock candy sugar and sour cherries, this spirit is a nostalgic representation of the original saloon era cocktail. 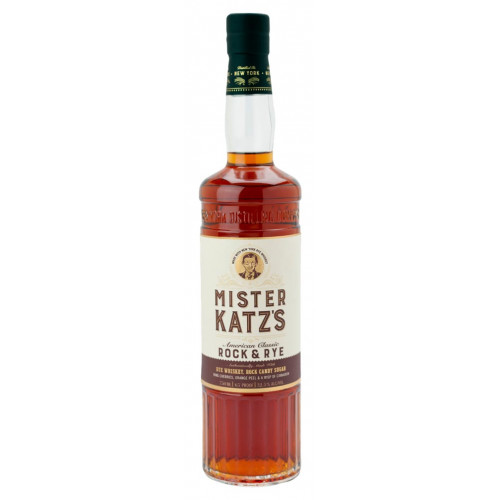 By the turn of the century, Rock & Rye blurred the line between refreshment and remedy. Pharmacists prescribed Rock & Rye to snuff out coughs, colds, sore throats, bronchitis, asthma and pneumonia — no ailment was too great or too small for Rock & Rye’s therapeutic relief. In 1890, the Memphis Medicinal Monthly stated that when a man "gets within twenty yards of the door of the saloon he commences coughing, and he puts his hand over his chest with an agonized expression and slips in the door and takes some Rock and Rye."

Rock & Rye’s reputation as a panacea continued well after Prohibition. At a 1952 conference for the Common Cold Foundation, Dr. Thomas Ward, a prominent Johns Hopkins virologist, was asked what medicine he preferred to use against rhinovirus. "Personally, my favorite treatment is old Maryland Rock & Rye," he replied. Nearly two decades earlier, Earl Hines and his orchestra recorded a dance chart entitled "Rock and Rye," which was penned by arranger Jimmy Mundy (who was later hired by Benny Goodman).

A century or so ago, finding rock and rye was easier than it is today. "I believe any saloon worth its salt made its own rock and rye," says Allen Katz, the founder of the New York Distilling Company and the namesake behind Mr. Katz’s Rock & Rye. Katz’s whiskey is made using a secret recipe of rye whiskey, rock candy sugar, sour cherries, cinnamon and a wisp of citrus. Once the ingredients are married together, the whiskey is filtered and brought to proof before being bottled by hand.

Mr. Katz’s Rock & Rye has a warm aroma of maple syrup, vanilla, citrus and Nerds candy. Notes of sweet caramel, milk chocolate and butterscotch on the palate are balanced by a peppery finish accented by hints of cinnamon.

Our Rock & Rye "fits in very neatly into our unwritten philosophy of making spirits that are purposefully different," says Katz.

Warm aroma of maple syrup, vanilla, citrus and Nerds candy. Notes of sweet caramel, milk chocolate and butterscotch on the palate are balanced by a peppery finish accented by hints of cinnamon.