Size750mL Proof84.8 (42.4% ABV)
This Whiskey represents a unique, limited edition expression from one of the oldest whiskey brands in the United States.
Notify me when this product is back in stock. 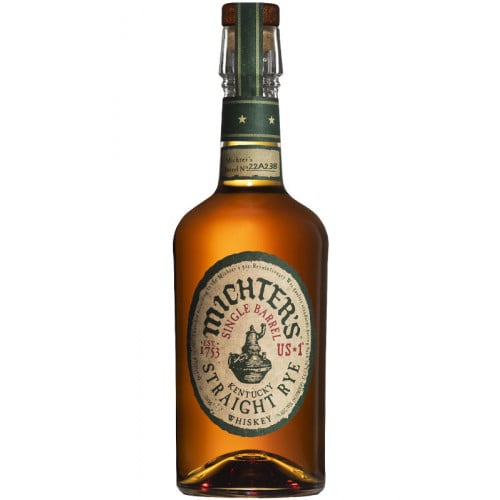 The passage of Prohibition in 1919 forced Michter's, along with nearly every other distillery in the United States, to close. In the early 1990s, however, Joseph J. Magliocco teamed up with Richard Newman in an effort to resurrect the brand. "When we set up our whiskey program for Michter's," says Magliocco, "Dick and I wanted to get back to the "cost be damned' roots and produce the finest whiskey possible. Our goal was to show that whiskey made in the United States could be the equal of great whiskey made anywhere in the world."

Michter's US*1 Single Barrel Straight Rye Whiskey is made from a mash comprised primarily of fresh, plump rye grains. Once the grains are harvested, they are sheared so that during fermentation, the grains are saturated with more flavor. After the grains have been fermented, they are distilled through a copper-pot still before being matured in charred, American oak barrels. The barrels are allowed to rest in a heat-cycled warehouse, which forces the wood to expand and contract as the temperature rises and falls. This heat cycling causes the whiskey and wood to mingle with each other, and contributes notes of marmalade and light caramel to the rye. Once Willie Pratt — Michter's Master Distiller — determines that the rye has reached its peak flavor, each bottle is filled and sealed by hand.

Michter's Single Barrel Straight Rye Whiskey has an aroma of spices, dark fruits, rye bread and vanilla. The aroma gives way to notes of citrus, baked goods, cinnamon and caramel on the palate, which complement touches of herbs and toast. The finish, which is both sweet and warming, ends with a touch of caramel.

Michter's Barrel Rye represents unique, limited edition expressions of whiskey from one of the oldest brands in the United States.

Pick up your bottle of Michter's today!

Aroma of spices, dark fruits, rye bread and vanilla. Notes of citrus, baked goods, cinnamon and caramel on the palate, which complement touches of herbs and toast. Finish, which is both sweet and warming, ends with a touch of caramel.