Learn more
Size750mL Proof92 (46% ABV) *Please note that the ABV of this bottle may vary
Aged for a minimum of ten years, this whiskey is crafted exclusively from Western Canadian barley.
Notify me when this product is back in stock. 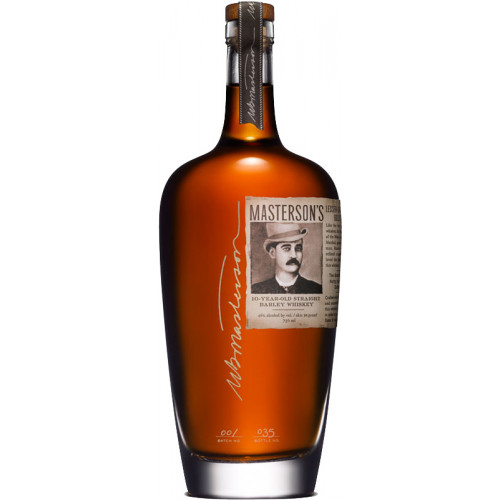 Born on November 26, 1853, William "Bat" Masterson left his family farm in Henryville as a teenager in order to become a buffalo hunter. After a few years hunting buffalo, Masterson became a scout for the United States Army during a campaign against the Kiowa and Comanche Indians. By the age of 24, he had moved to Kansas and been elected sheriff of Ford County. In 1879, Bat was voted out of office and spent the next several years making a living as a professional gambler and saloon owner. During this time, Masterson was said to have avenged the deaths of his two brothers, and his famous revolver was nicknamed "the gun that tamed the West." By the time he passed away in 1921, Masterson had done it all, and done it all well.

Masterson's 10 Year Old Straight Barley Whiskey is made in homage to Bat.

Masterson's 10 Year Old Straight Barley Whiskey is crafted exclusively from Western Canadian barley. Once the grains are mashed and fermented, they are twice distilled through copper-pot stills. Following distillation, the whiskey is matured for a minimum of ten years in white oak casks, before being brought to proof with mineral-rich glacial lake water.

Masterson's 10 Year Old Straight Barley Whiskey has a dark amber color, along with an aroma of earthy minerals and malt. The aroma gives way to smooth notes of dried fruits, particularly oranges and apricots, that are balanced by hints of caramel and vanilla. The finish is profound yet gentle, with touches of cinnamon, oak and cedar lingering throughout.

Aroma of earthy minerals and malt. The aroma gives way to smooth notes of dried fruits, particularly oranges and apricots, that are balanced by hints of caramel and vanilla. The finish is profound yet gentle, with touches of cinnamon, oak and cedar lingering throughout.