Size750mL Proof90 (45% ABV)
This unique rye is crafted with a mash bill of 95% rye and 5% malted barley. Aspen discs are added into the barrels during aging, making for a unique flavor profile that invokes the woods of Colorado. 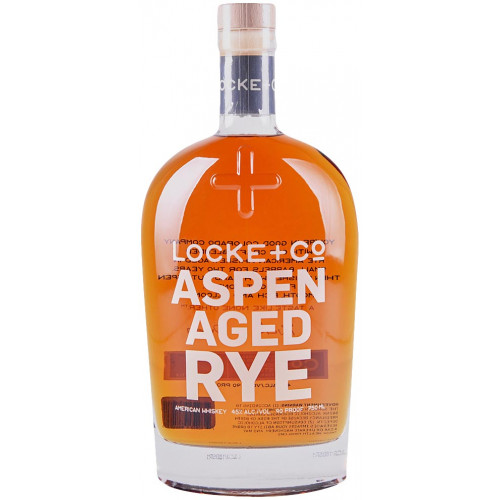 Lock + Co. Distilling was founded by Rick Talley and Owen Locke. Locke, a 6th generation Colorado native, has been enamored with fermentation ever since he started homebrewing as a 15-year-old boy and has fallen in love with the complexity and uniqueness of rye. It's a passion he shares with Talley, a fellow Coloradan.

It was in 2010 that the two friends first bought a 23-gallon still and started making their whiskey, aging it in small barrels. Locke's experience along with several generations of moonshining in his family complimented Talley's knowledge and skills ― skills that they honed together while working for Beam Suntory. It was there that they realized that they could have something bolder and wilder to offer than the spirits they were dealing with.

Locke + Co. Aspen Aged Rye Whiskey is the first expression to come out of the distillery and one that embodies the warmth and friendship that the company is built on. Crafted from a mash bill of 95% rye and 5% malted barley, the classic small-barrel American rye is enriched by Colorado aspen wood discs that are placed in the barrels. This results in a smooth and flavorful spirit that is bottled at 90 proof.

The nose opens with aspen notes that invoke the smells of the forest. There's an earthiness to it with some raisins and rye spice notes as well. It's sweet on the palate with more of those forest notes, spice, toffee, and wood. Finishes woody and sweet.