Size750mL Proof90 (45% ABV)
This special Masterson series release is aged for 10 years and finished in fine grain Hungarian oak barrels sourced from Quercus Petraea.
Notify me when this product is back in stock. 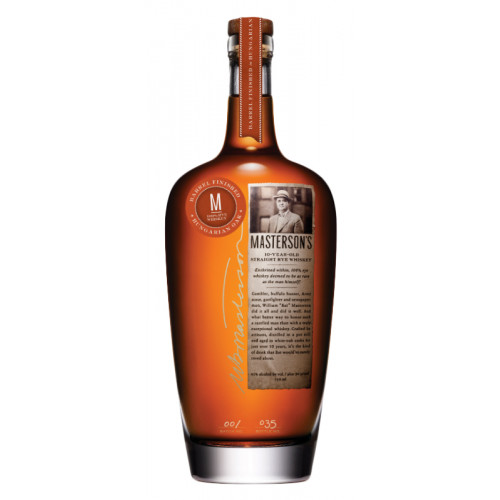 Born on November 26, 1853, William "Bat" Masterson left his family farm in Henryville as a teenager in order to become a buffalo hunter. After a few years hunting buffalo, Masterson became a scout for the United States Army. By the age of 24, he had moved to Kansas and was elected sheriff of Ford County. In 1879, Bat was voted out of the office and spent the next several years making a living as a professional gambler and saloon owner. During this time, Masterson was said to have avenged the deaths of his two brothers with the help of his famous revolver, which was nicknamed "the gun that tamed the West." By the time he passed away in 1921, Masterson had done it all, and done it all well.

Made in homage to Bat, Masterson's 10-Year-Old Straight Rye Whiskey is made from 100% rye grains. The rye is grown in the verdant Pacific Northwest, and only grains that exhibit the perfect combination of weight, plumpness and rich, earthy fragrance are harvested. After the grains have been milled and mashed, they are fermented with inoculated, dry yeast, which helps give Masterson's Rye its unique flavor profile. The wash is then distilled through pot stills, before being aged in white-oak casks for just over a decade.

This special Masterson series is comprised of 10-year-old whiskeys that have undergone a finishing period in one of three different barrel types: American, French, or Hungarian oak. After ten years of aging, this whiskey is finished in fine-grain Hungarian oak barrels sourced from Quercus Petraea. These barrels were air-dried outdoors for at least two years, promoting natural fungi (moss) growth on the barrels, which subsequently releases more vanillin. Hungary's dynamic four-season climate also imparts a delicate balance accentuating vanillin and nut flavors. This flavor has sweet wood overtones, finished up with a smooth round mouthfeel.

Fruit forward on the nose with spices, earthy notes, oak, peaches, plums, vanilla and a subtle nuttiness. The palate delivers big notes of vanilla, oak, currants, and a hint of tannins. The finish a complex blend of oak and leafy greens followed by wet earthy notes.