Size750mL Proof80 Proof (40% ABV)
Distilled from 100% figs and certified kosher, Mahia earned a score of 93 points by The Tasting Panel Magazine.
Notify me when this product is back in stock. 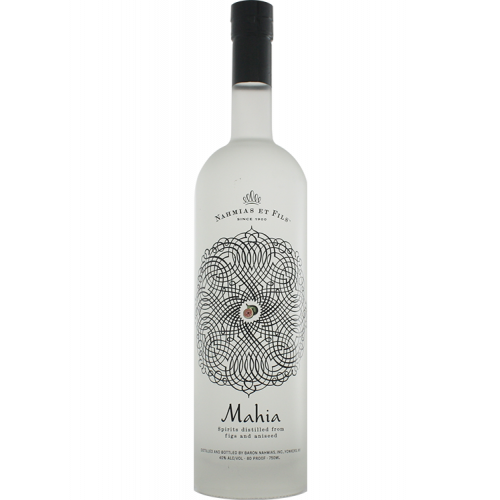 Born in the small town of Taznakht in southern Morocco, David Nahmias grew up in a family of Moroccan moonshiners. His family had been distilling Mahia — a type of Moroccan moonshine — for generations before David moved to the United States in 1981. "When I was six or seven years old,"he says, "I used to watch my parents distilling. My mother taught me her recipe when I was just a boy."

Staying true to his Moroccan roots, Nahmias mimics his mother's recipe the best he can — "it's hard because she had no measurements,"he sheepishly adds. Mahia is made from distilling 100% figs harvested from common fig trees. Common fig trees are incredibly resilient to drought and heat, which has resulted in figs becoming wildly popular throughout the Mediterranean and Middle East. Nahmias sources figs from California and has them transported to his distillery just outside New York City. After the whole figs arrive at the distillery, he crushes them three times in order to produce a doughy-type mash. The 100% fig-mash is then fermented for up to two weeks at low temperatures. Following fermentation, Nahmias distills the wash inside a 1,000 liter, 4-plate Kothe copper pot still. During distillation, he adds fresh, domestically-sourced anise to the still's vapor basket, infusing the fig distillate with notes of dark licorice and absinthe.

Certified kosher, Mahia's unique aromas and flavor profile — a nose of ripe, earthy figs gives way to notes of anise and licorice, along with vanilla, cinnamon and spices — earned it a score of 93 points by Anthony Dias Blue at The Tasting Panel Magazine.

After distillation, each bottle is filled and corked by hand. The bottles, which were featured in the July 2011 issue of HOW Magazine, were designed by Nancy Harris Rouemy — a former art director at The New York Times Magazine — and are made by a sustainably-focused manufacturer. The swirl icon on each bottle, which is Arabic in design, is meant to represent infinite possibilities. Pick up a bottle of infinite possibilities today!

Nose of figs, with a dark, fruity undertone. Taste initially is reminiscent of absinthe due to the anise, but less sweet and darker. Hints of cinnamon, nutmeg and vanilla throughout. Finish has sweet hints of fig, along with a dry, light licorice flavor.