Size750mL Proof80 (40% ABV)
Lvov Beet Vodka is a smooth and clean vodka, distilled from beets in Poland, the birthplace of vodka. It is named after the town where Poland’s first modern industrial vodka distillery opened in 1782.
Notify me when this product is back in stock. 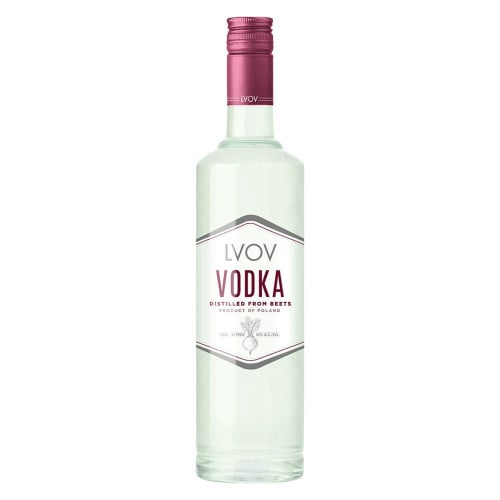 Vodka is widely believed to be a Russian drink, but it is said that Poland was producing vodka nearly a century before Russia. The world's first written mention of the word vodka was in 1405 in the court documents from the Palatinate of Sandomierz province in the Kingdom of Poland. Today, Poland, Russia and Sweden equally claim their variations of vodka as their national spirit.

Lvov is made in Poland and crafted the same way it has been for generations. The Lvov line comprises vodka and spirytus, a neutral grain spirit with high alcohol content also known as rectified spirit. Lvov products take their name from the Ukrainian town of Lvov or Lviv, which was part of Poland before the map lines of the region changed in the Second World War, and where the first modern industrial vodka distillery opened in 1782. Most modern vodkas are produced from grain, however the original Lvov expression is made from potatoes, which were introduced into vodka production in the late 18th century and became dominant over the next century.

Lvov Beet Vodka is a smooth and clean vodka with a touch sweetness and peppery spice. It is distilled from beets and bottled at 40% ABV. Lvov Beet Vodka is kosher. Perfect as a mixer or served ice cold or over ice on its own.

This is a smooth and clean vodka with a touch of sweetness and peppery spice, followed by a hint of vanilla essence.