Learn more
Size750mL Proof60 (30% ABV) *Please note that the ABV of this bottle may vary
With 0 sugar and carbs, this flavored expression is based on Grey Goose winter wheat vodka. Crafted with real fresh watermelon and basil, the natural 60-proof vodka is rich, juicy, and bright ― perfect for a hot summer day, either on its own or in cocktails. 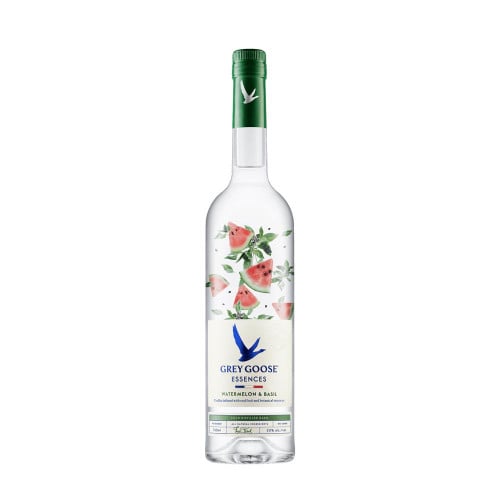 The water used in production comes from the natural spring, Gensac-la-Pallue, in the Cognac region, where it gets filtered through Champagne limestone. Grey Goose is crafted with locally sourced soft winter wheat grown in Picardy (known as "the breadbasket of France"), a wheat-growing region in France. The grain is sown in October and harvested in August. This wheat, classified as "superior bread-making wheat," is the only grain used in Grey Goose. According to Thibault, soft wheat, as opposed to hard wheat, is better for distilling, the four additional months of growth in comparison to summer wheat yielding a more durable grain.

Grey Goose’s ingredients are column-distilled in a facility in the same region. Enzymes are used to break down the carbohydrates into fermentable sugars, and the fermentation takes place continuously over six cascading tanks. The wash is then distilled once into spirit using a five-step process. The calcium-rich Gensac-La-Pallue spring water is drawn from 150 meters below the blending facility in Cognac. The spirit is filtered through a copper filtration system in order to infuse it with additional flavor. The distillate is sent to a plant in Cognac, France, dedicated to the sole purpose of bottling Grey Goose. The resultant spirit is cut with spring water, bottled at 60 proof, and corked.

Grab a bottle of this juicy sugar-free flavored vodka today!

It's a juicy and rich nose with freshly sliced watermelon, floral notes, and hints of basil. The palate is bright and bold with fruity watermelon, as well as pastry notes. The finish is fruity and mineral with a touch of vanilla and basil.