This product is available in: CA, NE, NH, NJ, ND Unfortunately, we can't ship to PO Boxes and APO addresses.

Size750mL Proof80 (40% ABV)
Loft & Bear comes from a small distillery in a loft in the Downtown LA Arts district that was founded by Paul 'Bear' Ryan. The premium artisanal vodka is hand-made in small batches and has a super-clean, smooth, and creamy profile.
Notify me when this product is back in stock.

This product is available in: CA, NE, NH, NJ, ND Unfortunately, we can't ship to PO Boxes and APO addresses. 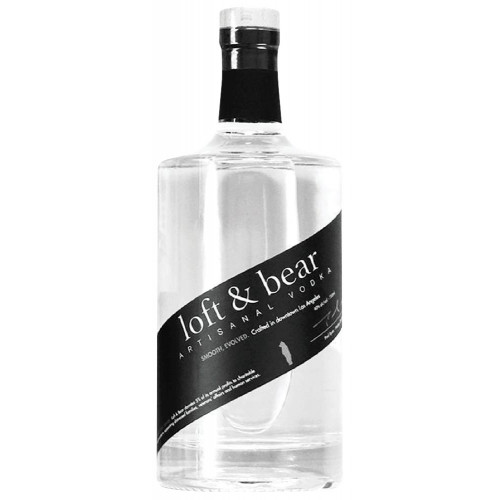 Loft & Bear got its start in 2013 when distiller Paul 'Bear' Ryan started distilling in a loft in the Downtown Los Angeles Arts District. After he graduated from Chapel Hill, feeling unfulfilled at his post-grad job, he was searching for a way to stimulate his creativity and entrepreneurial spirit. Thus, Young State America was born ― a distillery focused on artisanal vodka, only the second in Los Angeles to open its doors since prohibition.

The operation with its humble beginnings soon grew into a respectable 1,400-square-foot distillery, focused on producing premium craft vodka. "The distillery started out of my love for vodka," says Ryan. "I grew tired of being the consumer of a product I knew that with enough time and effort I could learn to produce better myself…" They donate a part of their profits to the international nonprofit health organization PATH and other charities.

The artisanal vodka is hand-crafted in small batches, starting with the distillation of the organic winter wheat and Californian mountain spring water. A copper pot still is used to distill the vodka 4 times. Bottled, labeled, and signed by hand, the 80-proof spirit has a super-clean, smooth, and creamy profile with gentle notes of vanilla and lemon and has struck silver at the 2014 San Francisco World Spirits Competition, among several other awards.

The profile is clean and creamy with a gentle sweetness, vanilla, and subtle citrusy and lemon zest notes. The soft winter wheat makes it extra smooth. Finishes medium and creamy with vanilla and a touch of anise. Its crispness is superb in cocktails, yet the texture makes it perfect as a sipper as well.