Learn more
Size750mL Proof80 (40% ABV) *Please note that the ABV of this bottle may vary
A blend of three unique vodkas, this wheat and gluten-free vodka was rated the #1 Vodka in the world at the Ultimate Spirits Challenge in 2013.
Notify me when this product is back in stock. 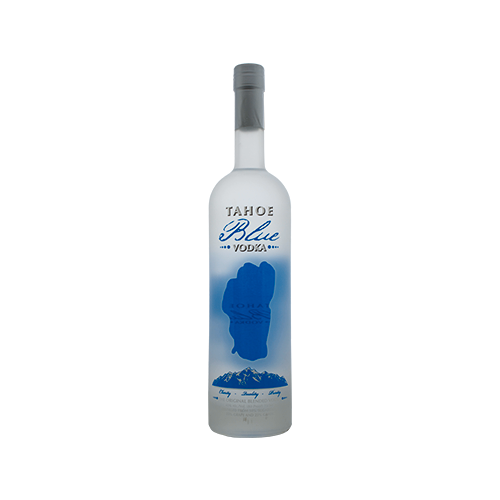 Situated along the border between California and Nevada, Lake Tahoe is the largest alpine lake in North America, and the second deepest lake in the United States. It is known for its pure, natural blue water; while Lake Tahoe is served by 63 tributaries, approximately half of the water in the lake is sourced from rainwater falling directly upon it.

"We wanted to create something that had the clear, pristine and natural quality of Lake Tahoe," says Matt Levitt, the founder of Tahoe Blue Vodka. "Our main focus was balancing the natural resources of the area and creating a vodka without any bite or lingering aftertaste."

Once each vodka is distilled individually, the vodkas are blended together and then distilled twice more in order to ensure that the flavors have harmonized with each other. Then, the vodka is carbon-filtered before each bottle is filled and labeled by hand at the California distillery.

Tahoe Blue Vodka earned the Chairman's Trophy and was rated the #1 Vodka at the Ultimate Spirits Challenge in 2013. Pick up a bottle today!

Smooth and pure, with hints of citrus, sweet grapes, and a touch of saltines. No lingering aftertaste.