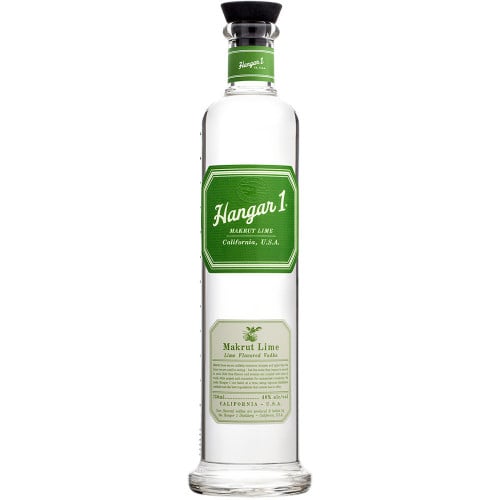 In 1982, Jorg Rupf laid the groundwork for the modern artisanal distillation movement when he founded St. George Spirits, situated in Alameda, California. Rupf had just emigrated to the United States from Germany, and was inspired by the spectacular quality of California's vineyards and fruit orchards. Drawing upon his family's generations of experience — the Rupf family had been distilling eau de vies in Germany for centuries — Rupf purchased a 65-gallon Holstein copper-pot still and began distilling spirits in a 5,000 square-foot warehouse in northern California.

Hangar 1 Makrut Lime Vodka is made by infusing Hangar 1 Straight Vodka with Makrut limes. Makrut limes are slightly more bumpy and astringent than ordinary limes, but are blessed with highly aromatic oils and intense flavors. The limes, together with their leaves, add notes of woody spices, cucumber and lime to the vodka. "The resulting spirit is like nothing we've ever tasted," says Rupf, "unmistakably lime, and endlessly complex."

Hangar 1 Mandarin Blossom Vodka is made by infusing Hangar 1 Straight Vodka with the blossoms of the Mandarin orange tree. The Mandarin blossoms are popular with bees, and as a result, the blossoms must be harvested while wearing bee suits. "It takes an hour to harvest a pound of Mandarin blossoms," says Rupf, and "it takes 100 pounds of blossoms to do just two bottlings of our vodka. "Hangar 1 Mandarin Vodka has an aroma of candied citrus peel, orange zest and fresh juice that is followed by subtle hints of tangerine, wildflower honey and rosewater on the palate. The finish is slightly sweet, with a tart burst of citrus.

Each batch of Hangar 1 Vodka represents the "true expression of from the tree into the bottle," says Rupf. Try four unique, delicious vodkas today!