Learn more
Size750mL Proof101.3 (50.65% ABV) *Please note that the ABV of this bottle may vary
Aged for over 13 years, this limited edition rye earned a score of 94 points from the Ultimate Beverage Challenge.
Notify me when this product is back in stock. 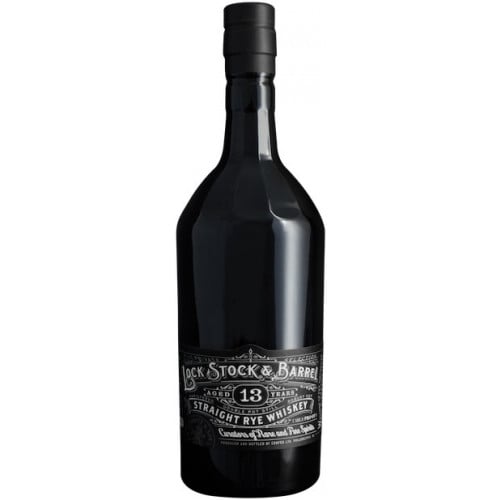 Lock Stock & Barrel Limited Release 13 Year Old Straight Rye Whiskey is crafted in Pennsylvania — the birthplace of rye whiskey — from 100% rye grains. The rye is grown in the Pacific Northwest, where only grains that exhibit the perfect combination of weight, plumpness and rich, earthy fragrance are harvested. After the grains have been milled and mashed, they are fermented before being distilled through a double copper-pot still. Following distillation, the rye is aged in new, charred American oak casks for 13 years before being bottled at nearly barrel proof (101.3 proof).

As a result of its extra-long maturation, the rye has an aroma of salted caramel, buttered popcorn and toffee. The aroma gives way to complex notes of sweet vanilla, milk chocolate, roasted coffee and honeyed oak, which are nicely balanced with a subtle spicy undertone, and lead a sweet, elegant finish.

Lock Stock and Barrel Rye Whiskey is a "Whiskeyman's Whiskey." It earned the Double Gold Medal at the San Francisco World Spirits Competition in 2014, and a score of 94 points from the Ultimate Beverage Challenge. Pick up a bottle today!