Learn more
Size750mL Proof103 (51.5% ABV) *Please note that the ABV of this bottle may vary
This extremely-limited release commemorates Laphroaig Distillery’s 200th anniversary.
Notify me when this product is back in stock. 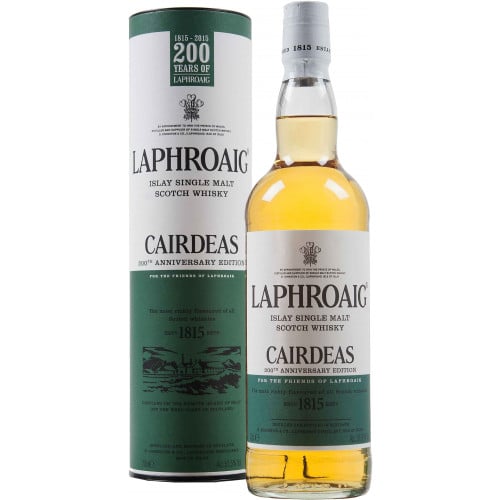 Laphroaig Single Malt Whisky is one of the most flavorful and intense whiskies made anywhere in the world. During Prohibition, it was one of the few whiskies still legally imported into the United States, as it was considered a medicinal spirit. Laphroaig Single Malt is made from the finest Scottish barley, which is then malted at the distillery and smoked over a peat flame. Unlike other distilleries which source peat from the Scottish mainland, the peat used to smoke Laphroaig barley is made from the heather, mosses and lichens of Islay and adds a distinct iodine-like flavor to the whisky. After the barley has been malted and peated, it is fermented before being twice-distilled through Laphroaig’s copper-pot stills. The unique stills have an usually flat base and flat surfaces, which contributes to the overall intensity of the whisky.

Each year, for the Feis de Isle (an annual festival hosted by the Islay distilleries), Laphroaig releases a new, limited edition of its Cairdeas Single Malt Scotch Whisky. Meaning “friendship” in old Gaelic, the 2015 Cairdeas is an extra-special bottling, as it commemorates the distillery’s 200th anniversary. Crafted from floor-malted barley and distilled through Laphroaig’s smallest stills, Laphroaig Cairdeas 2015 Single Malt Scotch Whisky is then aged in first-fill bourbon barrels in the distillery’s Warehouse #1 by the sea.

As a result, the whisky has a burnt straw gold color, along with a powerful nose filled with charcoal smoke, citrus fruits, grapes and freshly-cut wood. Notes of creamy milk chocolate, burnt vanilla, caramel and peat fill the palate, and lead to a complex finish accented by worn oak, tannins, salty air and tropical fruits.

We have only a handful of bottles of Laphroaig Cairdeas 2015 — pick one up today!