Size750mL Proof80 (40% ABV)
Aged for 16 years, this whisky earned a score of 94 points from the Beverage Testing Institute.
Notify me when this product is back in stock. 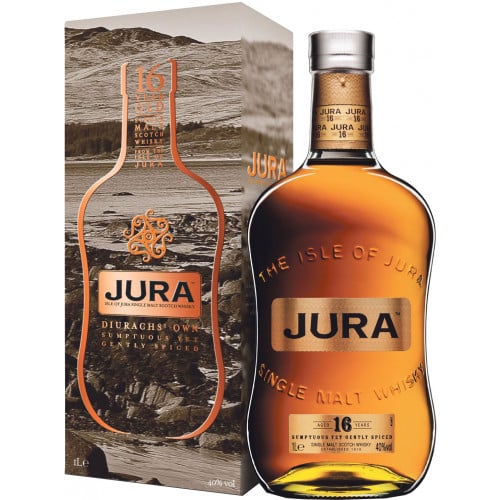 Situated sixty miles off the western coast of the Scottish mainland, the Isle of Jura is one of the most sparsely populated islands in Scotland — it boasts 5,000 red deer, 200 human beings, two churches and just one distillery. The Jura Distillery was founded in 1810 by Laird Archibald Campbell, and sits alongside the Corryvreckan Whirlpool. Nearly a century after it was opened, the distillery was dismantled due to a land dispute, and remained closed until 1963.

"It was our intention to produce a Highland-type malt differing from the typically peaty stuff last produced in 1900." said Delme' Evans, the architect and master distiller who set about restoring the distillery to its original glory in the 1960s. "My primary aim was to construct an economic distillery within the space available. Everything had to be simple and done by hand." Today, the Jura Distillery represents a fusion of modern distillation techniques with traditional craftsmanship, and remains one of the most remote and isolated distilleries on the planet.

Jura Single Malt Scotch Whisky is made from Scottish barley, which is milled at the distillery and mashed with hot water in order to release its natural sugars. Once the barley has been mashed, it is fermented and then distilled twice through Jura's 28-foot tall copper-pot stills. The stills' unusual size and shape emphasizes the high esther notes of the barley, and produces a noticeably lighter and fruitier whisky.

Isle of Jura 16 Year Old Single Malt Scotch Whisky has an aroma of toffee, honeyed oak and orange marmalade. The aroma gives way to notes of spicy ginger, salty tang and raisins on the palate, which are complemented by hints of red fruits, toffee and dark chocolate. The finish is long and complex, with notes of honey, citrus and smoke mingling with each other.

The whisky earned the Gold Medal at the San Francisco World Spirits Competition, and earned a score of 94 points from the Beverage Testing Institute. Pick up a bottle today!

Aroma of toffee, honeyed oak and orange marmalade. Notes of spicy ginger, salty tang and raisins on the palate, which are complemented by hints of red fruits, toffee and dark chocolate. Finish is long and complex, with notes of honey, citrus and smoke mingling with each other.