Learn more
Size750mL Proof80 (40% ABV) *Please note that the ABV of this bottle may vary
Aged for a minimum of four years in ex-bourbon casks, this Irish whiskey won the Gold Medal at the 2014 International Craft Spirits Competition. 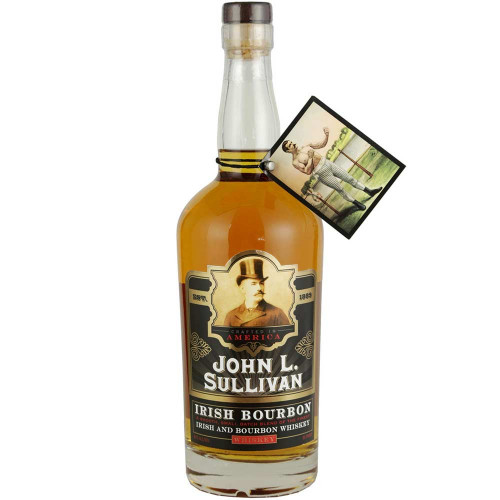 Born in the South End of Boston to Irish immigrants, John L. Sullivan was affectionately known as the Boston Strong Boy. Sullivan was the first heavyweight champion of gloved boxing, and is recognized as the last heavyweight champion of bare-knuckled boxing. By the time he retired in 1905, Sullivan’s record consisted of 40 wins (34 of which were won by knockout), 1 loss and 2 draws.

John L. Sullivan Irish Bourbon pays homage to the fighter. Matured in single use bourbon barrels for 4 to 10 years, the whiskey has a smooth aroma of vanilla and citrus. Notes of oak, roasted nuts, spice and caramel dominate the palate, and lead to a finish that is well-balanced and rich.

This is the first ever blend of American Bourbon & Irish Whiskey.

Underlying nutty complexity, which leads to honey, baking spices and French toast on the nose. Body is filled with notes of clementines and graham crackers, and leads to a smooth, malty finish characterized by freshly cut barley.