Size750mL Proof86 (43% ABV)
Crafted in south London, these limited-edition gins are distilled using centuries old recipes.
Notify me when this product is back in stock. 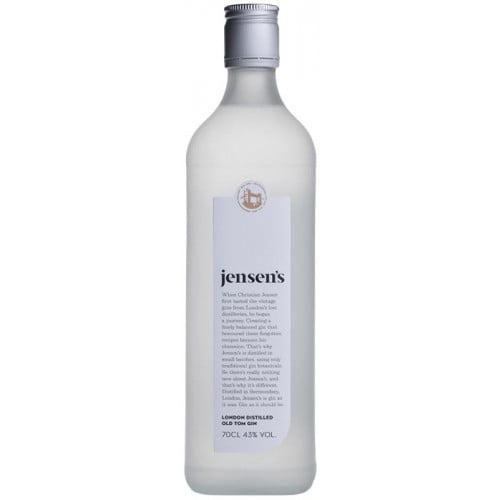 In 2001, Christian Jensen was forced to relocate from London to Tokyo for his job at an investment bank. After a particularly difficult day of work at the bank, Jensen stumbled into one of Tokyo's legendary hidden bars. The bar, which was comprised of only a tiny room with a stunning view, was tended to by Oda-San, a barkeeper whose knowledge of cocktails and spirits was a relic of the past. There, Jensen sampled a London Dry Gin with a sublime flavor and smooth finish that stunned him.

When Jensen returned to England, he began researching the gin and found that it was no longer made. In the hopes of recreating it, Jensen scoured the public records offices of London, and was able to find a few documents related to the distillery that had originally produced it. While scouring this cache of documents, Jensen discovered a recipe for his beloved gin. Armed with a photograph of the exact recipe in hand, Jensen teamed up with master distiller Charles Maxwell and began experimenting with the recipe he found. "After 10-15 trial distillations, we ended up with a gin I really liked, and was faithful to the original," says Jensen. .

Jensen's London Distilled Old Tim Gin is crafted using a recipe that harkens back to the 1840s. The term "Old Tom" was an early nickname for gin and generally refers to gins that were produced in the early 20th century, when sugar was added to gin in order to create a sweeter flavor profile. The recipe that Jensen discovered, however, predates the use of sugar in gin and calls for additional botanicals to be added in order to create a slightly sweeter flavor profile.

As a result of this unique, century-old recipe, Jensen's Old Tom Gin has an aroma of mint, eucalyptus, pine needles and citrus that gives way to slightly sweet notes of licorice, almonds and orange peel on the palate. The finish is smooth and slightly tangy, with a touch of piney juniper.

The gin earned 4.5 stars from the Difford's Guide, and the Silver Medal at the International Spirits Challenge.

Aroma of of pine and lavender. Notes of coriander, ginger and sage. Orris root lends a gentle hint of violet, while licorice and angelica contribute soft notes of almonds and woody spices.