Size750mL Proof100 (50% ABV)
Aged for four years, this rye whiskey earned a score of 90 points from the Beverage Testing Institute.
Notify me when this product is back in stock. 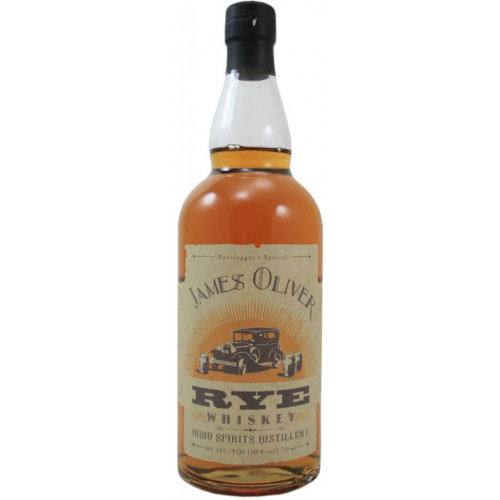 Prior to Prohibition, rye whiskey was the staple ingredient of classic cocktails such as the Old Fashioned, the Manhattan and the Whiskey Sour. Spicer and more robust than malt whisky, rye was so popular that George Washington distilled it at his estate in Mount Vernon. As distilleries across the country were forced to close their doors due to Prohibition, however, bootleggers began distilling gin instead of rye, and for good reason "“ gin didn't require aging under the watchful eye of a master distiller and its true flavors could be hidden behind a mask of botanicals. As Americans grew accustomed to gin, rye whiskey became an anachronism.

Nearly a century after Prohibition, the preferred whiskey of the saloon era is experiencing a resurgence. By law, rye whiskey must be made from a mash of at least 51% rye. Rye that has been aged in charred, new oak barrels for at least two years earns the title straight rye whiskey.

James Oliver Rye Whiskey is made from a mash of 100% rye grains, which are mashed and fermented before being distilled through a copper pot still. Following distillation, the whiskey is aged in new, American oak casks with a #4 char. Typically, the degree of charring within a cask is measured on a scale of one to four, with a #1 char referring to casks that have been slightly toasted, and a #4 char referring to casks that have been charred so heavily that the interior resembles an alligator hide (the latter are nicknamed alligator-charred casks). After a four year beautyrest in alligator-charred casks, James Oliver Rye is brought to proof and bottled by hand in Oregon.

James Oliver Rye Whiskey has a golden amber color, along with an aroma of granola, greek yogurt, rye and peppercorn. Notes of spicy grains, buttered dough and roasted nuts dominate the palate, and give way to a finish accented by notes of black pepper and honeyed nuts.

The whiskey earned a score of 90 points from the Beverage Testing Institute, which called it "exceptional." Pick up a bottle today!

Golden amber color, along with an aroma of granola, greek yogurt, rye and peppercorn. Notes of spicy grains, buttered dough and roasted nuts dominate the palate. Finish accented by notes of black pepper and honeyed nuts