Size750mL Proof88 (44% ABV)
After the success of their bourbon, finished in Dragon's Milk stout barrels, New Holland felt it was time for rye whiskey to get the same treatment. Rye spice, vanilla, honey, and almonds make up this unique 88-proof expression's profile.
Notify me when this product is back in stock. 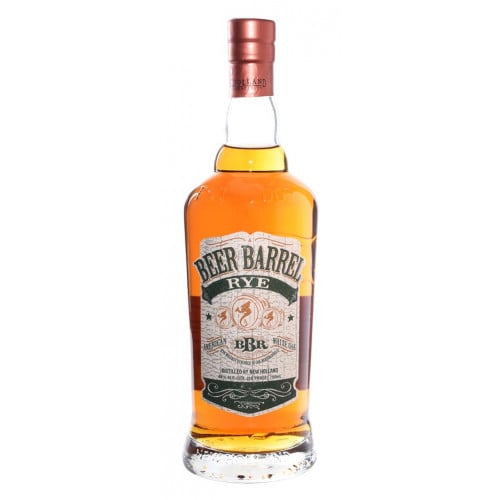 Inspired by the double-barreling process used at some of Scotland's most revered distilleries, Brett VanderKamp — New Holland Brewery and Artisanal Spirits' master distiller — decided to start aging whiskey in used beer barrels. Scotch, which is traditionally aged in ex-bourbon casks, is often double-barreled, or finished, in sherry casks. "The notes of sherry add another layer of complexity, color and richness to the Scotch," explains VanderKamp. "I thought we could do the same thing for whiskey."

While many craft brewers will attest that aging beer in whiskey barrels adds flavor and complexity to the beer, Beer Barrel Bourbon goes to show that the reverse is also true: aging whiskey in beer barrels results in a more complex and unique whiskey. After crafting Beer Barrel Bourbon at his distillery, VanderKamp ages it for several years in new, charred American oak casks. After the bourbon has matured, it is double-barreled, or finished, in casks that were formerly used to mature Dragon's Milk stout.

Dragon's Milk Ale is a high-gravity stout beer, meaning it initially has more sugar and density before fermentation than ordinary beers. The name itself can be traced back to the 17th century, when beer reserved exclusively for royalty was referred to simply as "Dragon's Milk." The crown jewel of New Holland Brewery's portfolio, the stout is matured for 90 days in oak casks that are then used to mature Beer Barrel Bourbon. The beer barrels add notes of roasted malt, along with deep vanilla undertones to the bourbon, and complement its subtle undertones of toffee and caramel.

After finishing their bourbon in Dragon's Milk barrels in 2013 and being pleased with the results, they felt it was time for rye whiskey to shine. And this is how New Holland Beer Barrel Rye came to be. The double-distilled rye is crafted in a similar way that their bourbon is, first being aged in American oak casks, before going for a round of finishing in Dragon's Milk barrels. Rye spice, vanilla, honey, and almonds make up this unique 88-proof expression's profile.

It's a unique profile that mixes rye spice with the richness of stout. There's dried fruit, vanilla, honey, and allspice on the nose. More vanilla and chocolate is on the palate, along with cured meat, clove, almonds, honey, and gentle spice notes. Finishes rich and slightly warming with lingering spice.