Size750mL Proof50 (25% ABV)
Stronger than sake and weaker than whiskey, this traditional shōchū is bright, fresh, and versatile. Great on its own, in cocktails, with tea, or paired with food, it recently won a Silver Medal at the San Francisco World Spirits Competition.
Notify me when this product is back in stock. 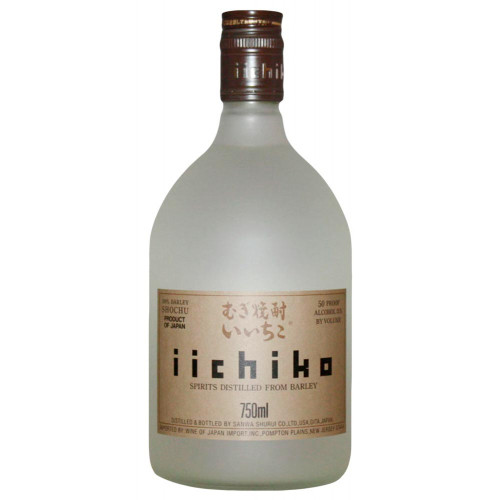 Situated in the Oita Prefecture on Japan's southernmost island of Kyushu, iichiko produces shōchū, a traditional Japanese spirit. The operation employs cutting-edge technology in making its award-winning spirits. But it's also the environment that contributes to the quality of the product. The region is famous for its clean air, forests, and mountains, as well as spings. The water iichiko uses is naturally filtered through volcanic rock and is soft and iron-free.

"Iichiko" means "it's great" in the local Oita dialect. The distillery was formed in 1958 and produced sake, wine, and shōchū. The very first iichiko shōchū to be made from barley was released in 1979. Since then the company has become one of the leading Japanese producers of barley shōchū.

While shōchū is most commonly distilled from rice, iichiko Saiten is crafted from polished 100% two-row barley, making it a distant cousin of whisky. It's a Honkaku shōchū, meaning it's the highest grade of the spirit and one that utilizes a single ingredient. No additives or sweeteners are added and the pristine water is filtered through 1,000 feet of volcanic rock.

The barley is steeped in this water before being steamed and left to ferment using koji, a type of mold that kickstarts the process of converting starch to sugar. It is then distilled once using low pressure and atmospheric distillation before the two raw distillates are blended together. The iichiko Silhouette is a traditional shōchū that is bottled at 50 proof. Lighter and super-versatile, it pairs great with food, as it is traditionally consumed. It is equally drinkable straight or on the rocks, as well as in cocktails, or even with tea.

This traditional shōchū has a bright and fresh profile that opens with melon and citrus on the nose. It's herbal on the palate with grain notes and a hint of nuttiness. Finishes herbal and refreshing.