$64.99
Caskers Rewards members earn up to 3 store points back when buying this bottle.

Size750mL Proof92 (46% ABV)
Hudson Whiskey NY Back Room Deal is Tuthilltown Distillery’s straight rye whiskey, aged for a minimum of 3 years in new, charred American oak barrels and finished in Peated Scotch barrels, creating a smoky and spicy expression. This limited-edition release is bottled at 46% ABV.
Notify me when this product is back in stock. 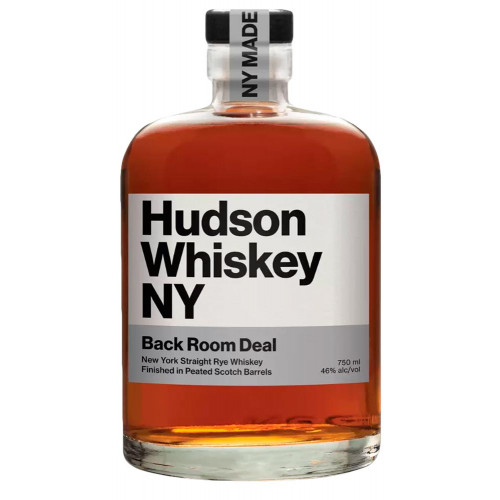 Hudson Whiskey NY Back Room Deal is a straight rye whiskey, finished in peated Scotch barrels. The whiskey, made with a mash bill of 95% New York rye and 5% malted barley, is aged for a minimum of 3 years in new, charred American oak barrels. This limited edition expression is then finished in ex-bourbon barrels, which the distillery sent across the Atlantic to be used for aging peated whiskey, then emptied and returned to New York. The spicy and smoky release is bottled at 46% ABV.

A bit of smoke on the nose is accompanied by a soft aroma of vanilla, apricot, and brown sugar. The palate is bright and fruity with black pepper and mint, and rye spice mingling perfectly with smoky peat notes. The peat lasts long on the finish, with just a little bit of sweetness.