Learn more
Size750mL Proof118 (59% ABV) *Please note that the ABV of this bottle may vary
Pot-distilled in South Africa at the Mhoba distillery in 2017, this rum is crafted with fresh pressed cane juice. It has spent 4 years in African whisky casks at the distillery before being bottled at 118 proof.
Notify me when this product is back in stock. 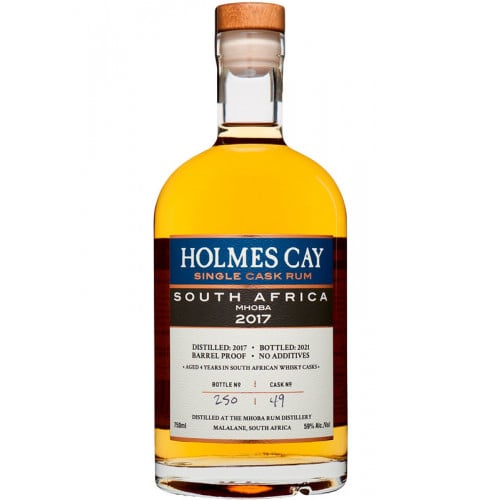 Holmes Cay South Africa Mhoba 2017 from their Single Cask Editions is crafted with fresh pressed cane juice from their adjacent farm and pot-distilled at the Mhoba Distillery in South Africa under the watchful eye of Master Distiller Robert Greaves. The artisanal, "cane-to-cask" distillery aged the spirit for 4 years in casks that used to hold African whisky. Bottled at barrel proof in 2021, the 118-proof rum has no added sugar, coloring, or flavors and is limited to only 1,026 bottles. It's the first South African rum to be sold in the US!

Get your bottle of this South African rum today!

The nose opens with tropical notes of grilled pineapple and cane on the nose. White pepper, light treacle, tropical fruit, and toasted fennel seed are on the palate, culminating in a slightly vegetal finish with a touch of smoke.