Learn more
Size750mL Proof118 (59% ABV) *Please note that the ABV of this bottle may vary
Distilled in 2011 in Jamaica and bottled in 2021 in New York State, this 100% pot still rum honors Wedderburn, a classic Jamaican Rum style. Featuring intense tropical fruit, tobacco and oak flavors, it's a beautifully balanced spirit.
Notify me when this product is back in stock. 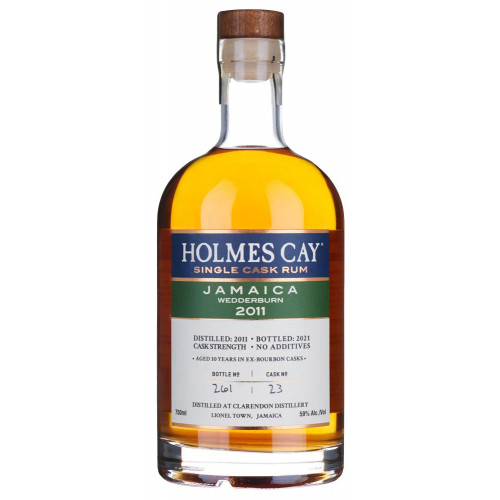 Passionately standing behind the tradition and supporting producers of traditional, unadulterated rums, Holmes Cay age statements are real and their unmistakable taste is created with aging alone without any sugar, color or flavorings. Kaye hopes to bring incredible as-of-yet-unknown rums to the US, introducing spirit-lovers to the best-kept secrets of the rum world. Their very first release ― Holmes Cay Barbados 2005 ― fittingly comes from the legendary Foursquare Distillery in Barbados.

To honor Wedderburn, a classic Jamaican Rum style, Eric Kaye and his team created Holmes Cay Single Cask Rum Jamaica Wedderburn. This 100% pot still rum was distilled in 2011 at the Clarendon Distillery, Jamaica, and bottled in 2021 in New York State. First tropically aged for 3 years in ex-bourbon casks in Jamaica and then for 7 additional years in the UK, it was bottled at cask strength or 118 proof. This outstanding expression is not chill filtered and founder Eric Kaye said that "it is a pleasure to offer this superior example of a medium ester, pot still rum to US spirits lovers. Its characteristic flavors ― created through lengthy open tank fermentation of molasses with natural yeasts ― are approachable and harmonious. Despite the intensity of the tropical fruit, tobacco and oak flavors, a balance is created."

Get one of the only 1050 bottles available!

On the nose, Jamaica Wedderburn 2011 is young pineapple and drying oak. On the palate, it develops into rich, overripe tropical fruit with black pepper and baking spices. The finish is leather and tobacco leaf.