Learn more
Size750mL Proof112 (56% ABV) *Please note that the ABV of this bottle may vary
Distilled in 2009 at Foursquare Distillery in Barbados, this blend of column and pot-still rum was first aged for 8 years in Barbados, then 2 in the UK. It was finally finished in New York in port casks, before being bottled at cask strength.
Notify me when this product is back in stock. 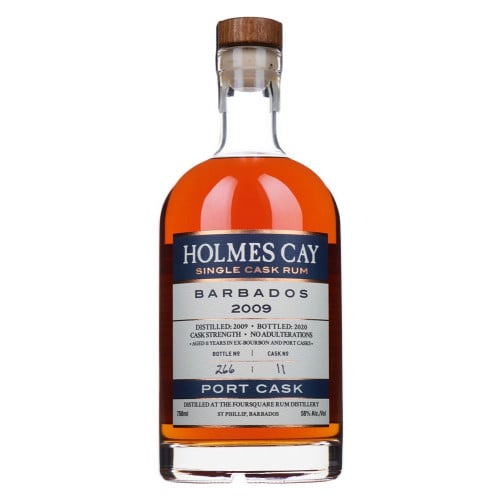 The Holmes Cay Barbados 2009 Port Cask Rum is another one from their fruitful collaboration with Foursquare. "The Barbados 2009 Port Cask is our first edition with secondary maturation. The secondary aging complements and highlights the existing character of the spirit," says Kaye. Distilled in 2009, it's a blend of column and pot-still rum that was aged 8 years in Barbados, then 2 years in the UK in ex-bourbon barrels, before being finished in port casks for another year in New York State. Bottled at 112 proof, only 2 casks of this 11-year-old cask-strength rum were produced.

It's floral with cherry and chocolate on the nose. The palate caramel and honey sweetness, oak, as well as plum and cherry. Finishes dry with lingering oak and dark chocolate notes.