Size1500mL Proof105.8 (52.9% ABV)
SAVE $100 when purchasing The Dark and The Light collection, two contrasting 17-year-old single malts celebrating winter and summer in Orkney. The first was matured in sherry-seasoned European oak casks, the second in refill American oak.
Notify me when this product is back in stock. 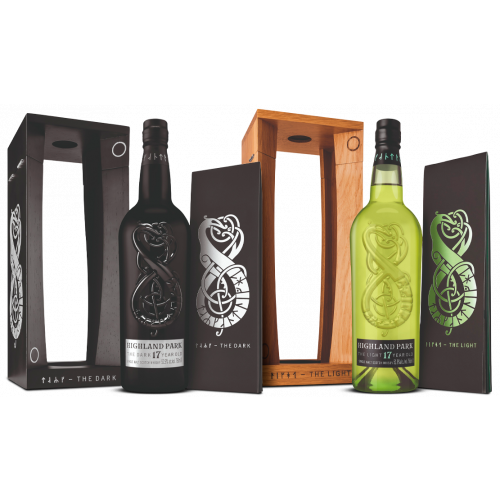 About Highland Park The Light & The Dark 17 Year Old Collection

This collection features both The Dark and The Light expressions of the two-part series that celebrates the Orkney climate and the distinctive influence it has on its whiskies. The Dark is an award-winning 17-year-old single malt Scotch whisky that has been matured in first-fill European oak sherry seasoned casks, delivering a distinctly deep flavor, packed with ripe cherries, toasted almonds, and dark chocolate overlaid with hints of smoky peat.

The Light is matured exclusively in refill American oak casks, highlighting the bright and fruity side of the legendary Highland Park spirit with flavors of creamy vanilla, baked pear, and nutmeg that meld luxuriously with rich aromatic smoke. Bottled in a beautifully embossed green glass vial, its serpent dragon design is inspired by the great Norse sagas, embracing both the high sun of the summer solstice and the low sun of the winter solstice. Both of these expressions have earned the coveted Double Gold medal at the San Francisco World Spirits Competition.

Grab both of these fantastic whiskies in one collection today!

The Light: You can expect a balance of baked pear, nutmeg, vanilla, peat, cedar wood, oak, and light smoky notes.