Learn more
Size750mL Proof92 (46% ABV) *Please note that the ABV of this bottle may vary
This special Highland Park single malt is matured in predominately in American ex-sherry casks for 21 years. 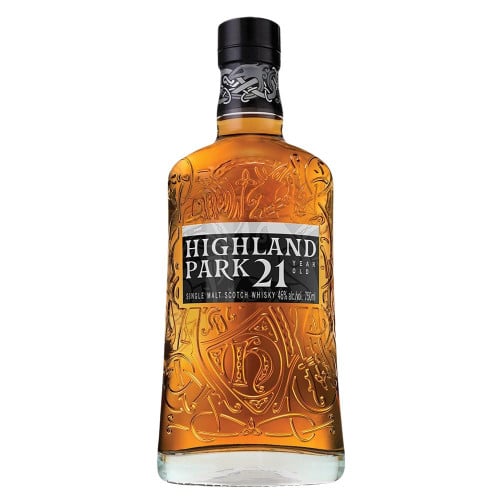 Their peat is hand-cut from the Hobbister Moor, no less than seven miles from the distillery. The moor is over 9,000 years old, going as deep as four meters. The barren woodless moor is composed layer upon layer of densely compacted vegetation. Rich in heather, the peat is dried naturally in the summer, then burned in ancient kilns, “where its heathery aromatic smoke infuses the malting barley.”

Highland Park is also one of the few distilleries that meticulously turns their malt by hand. Their barrels are cut from European and American oak, and crafted into staves at precisely 45°. This was the method used by the Vikings to make their longships watertight. This special Highland Park single malt is matured predominately in American ex-sherry casks for 21 years. It received "96 Points, Finalist, Tried & True Award" at the 2019 Ultimate Spirits Challenge, the "Gold Medal" at the 2019 San Francisco World Spirits Competition, and "97 Points & Chairman's Trophy for Best Island Single Malt" at the 2020 Ultimate Spirits Challenge.

Peat smoke, sun-ripened plums, and heather honey. Stone fruit and aromatic smoke on the palate with vanilla and spice, and sweet fruit notes followed by a dark chocolate finish.